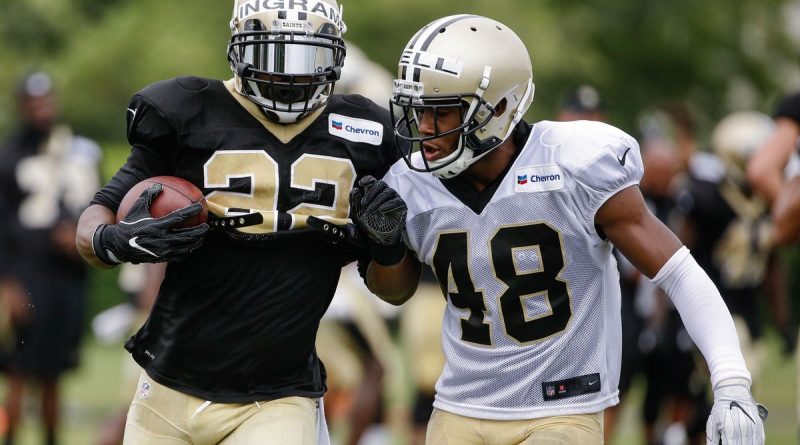 A Swiss Army Knife, A Stout Wall, and Stamina, Yep It’s About That Time Welcome To Saints Training Camp

Hold on to your Who Dats, people. Football is coming at you fast. The Saints have already started training camp, and in less than two weeks they’ll be playing their first preseason game. Training camp and the preseason is all about the hype, and the Saints deserve all that they have gotten – back to back division championships, a play away from the NFC Championship one year, a blown pass interference call away from the Super Bowl a year later. But here we are, on cusp of excitement, wondering if we will finally see another parade on Poydras St. or suffer through heartbreak again.

So far, all the talk has been about Michael Thomas, who’s gone all Rod Tidwell on the Saints, vowing to holdout of camp until they show him the money, reportedly $20 million a year to be exact. With Brees turning 40 and in the last year of his contract, the Saints are in win now mode.  If that’s not enough incentive to show Thomas the money, then the play of Tre’Quan Smith, Keith Kirkwood, Austin Carr, and Cameron Meredith should be. The 4 of them combined for 59 catches last year. Thomas caught 125. After the Saints sign Thomas or franchise tag him, a Super Bowl season hinges on three key areas.

Murray, in Oakland and Minnesota, has already proven himself to be a solid runner. But Oakland and Minnesota don’t run Sean Payton’s offense. Payton has always asked his running backs to be more than just runners. He expects them to also pick up blitzes and catch passes out the backfield. It just makes the offense that much more unpredictable. During 3 of his last 4 seasons with the Saints, Ingram was excellent at being that Swiss Army knife.  Last season all of his numbers were down due to being suspended for 4 games and later never really finding his groove, but in the 3 seasons prior he averaged 51 catches while also rushing for over 1,000 yards in back to back seasons and over 700 in another. All of that offensive production is now in Baltimore with Ingram.  How Murray steps in, not just as a runner, but as an all-around back, will determine how efficient the offense will be.

Last season, the Saints had a dominant run defense. The Saints were the 2nd ranked rushing defense in the league and didn’t allow a running back to rush for over 100 yards all season – whether it was Ezekiel Elliott, Christian McCaffrey, or Saquan Barkley. And they did so without stacking the box. Being stout up front, allowed Dennis Allen to be more versatile on the back end. The Saints spent as much time in a 3-safety set as they did in a 3 linebacker one. In a league geared toward passing, it helps a lot when you can be more creative in your coverages without worrying about getting gashed up front. Sheldon Rankins was a major part of that. If he doesn’t miss most of the year recovering from his torn Achilles, he’ll most likely spend it trying to regain his explosiveness and strength. Clearly the Saints are concerned about this because they brought in 3 defensive tackles to plug the hole Rankins’ injury has left. With Alex Okafur leaving for Kansas City, the Saints have lost a lot of experience and depth up front. If their replacements aren’t as efficient or don’t gel quickly, then expect the defense to take a step back.

Over the last 2 seasons, this has not been a 2nd half unit. Each season, the offense has started out on fire, only to fizzle during the 2nd half of the year. And the problem has started up front. As the season goes on, 1 of 2 things tend to happen – lineman either go down with injuries, or for some reason they just cease to be as physical upfront. On paper, the Saints seem ready to deal with both. Via free agency and the draft, they all of a sudden have a lot of young depth. On their way to utilizing it, the first thing they need to do is figure out who’s replacing Max Unger at center (rookie Erick McCoy, free agent signee Nick Easton, or 3rd year player Cameron Tom). The sooner they figure this out, the sooner the other two can get comfortable in the positions they’ll have to fill in when injuries do happen. Having not only depth but young depth may pay off later in the season when a veteran like Max Unger appeared to wear down.

As with any other Saints camp, expect some undrafted rookie to make a splash, and expect one they drafted to impress more than anyone imagined. But watch those 3 areas. They’ve been the foundation over the past 2 seasons that have made this team go.

P.S. If Zion Williamson doesn’t lead The Who Dat chant for the opening game Monday night, then question all Gayle Benson knows about marketing.