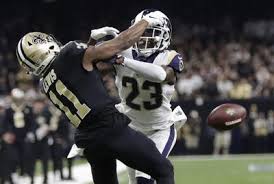 As the season approached, many Saints fans kept an eye on training camp and the lawsuit filed by fans against the NFL and Commissioner Roger Godell. But early this morning the team killed the dreams of many disgruntled Saints fans. Nope Godell won’t be coming to a packed courtroom in Civil District Court. Nope Superbowl LIII won’t be replayed. And Tom Brady and the New England Patriots get to keep the Lombardi trophy.

The Saints filed paperwork siding with the NFL and insisting that Louisiana law should be the same as everywhere else – fans cannot sue over missed calls.

Real Saints fans should rejoice. Football battles should be won or lost on the gridiron not the courtroom. We can’t go from instant replay to a judge deciding if a game was actually won or lost. This would be a terrible precedent. Would we have to have judicial review before standings could be updated? Drew Brees should not have to take off his uniform and explain to a judge and jury how he lofted a perfect pass that would have been caught and extended the game. That ain’t football!

Athletes not lawyers win or lose football games. The Saints organization manned up, no bossed up and said we will kick the Rams asses on the football field this year. We don’t need no stinking lawyers. Lace em up and play ball.

New Orleans football fans can now focus on this year’s team. WBOK am 1230 sports director, Ro Brown said, “The Saints brass decided the lawsuit would be a distraction and serve no real purpose.” With the lawsuit out of the way, the fan base can cheer for this year’s team and forget about last year. It’s over and never going to change.

Buckle your chinstraps Saints fans, cause the new season, with a real chance for a SuperBowl win is about to begin.