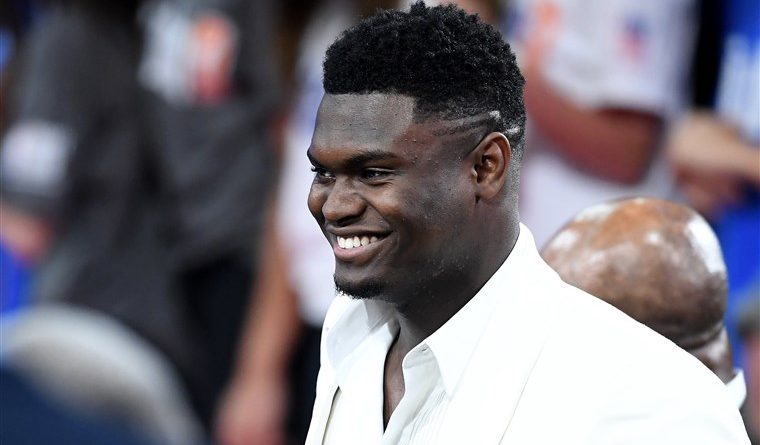 If Jerry Maguire had you at hello, then Zion Williamson had to have had you at let’s dance. Thursday night, there he was all 6’ 7” 285 lbs of him standing center stage on national TV, white tuxedo gleaming, eyes full of tears, saying take me New Orleans I’m yours. Down on Fulton Alley confetti shot up into the air. Music blasted. People cheered and danced. An ESPN reporter fell backwards and surfed over the crowd. In the draft room, Alvin Gentry said it best: this city hasn’t been this excited about a pick since Reggie Bush was drafted. And so, it begins: The Era of Zion.

Who would’ve thunk it? A few months ago, the Pelicans were sucking on lemons as Anthony Davis went from a humble introvert to a bitter prima donna demanding a trade. The franchise was in disarray at the time. Fans were frustrated and not showing up to games. Then the Pelicans turned that sour situation into sweet lemonade. The recipe went as follows:

– take one-part disgruntled star and sit him on the bench to ensure the worst record possible.

– mix that record with a high degree of luck and win the number 1 pick in the NBA draft.

– take the highest of those picks (this year’s number 4) and trade it for 3 more picks.

– take 2 of those picks and draft an athletic  big man, a small forward,  and a guard.

Next thing you know, you have Zion, the biggest star the draft has seen since LeBron, and a roster full of young talent to build on. To top it all off though, the Pelicans managed to trade Solomon Hill to the Hawks, a move that potentially creates $32.5 million in cap space. That’s top tier free agent money. That’s taking lemons and making lemonade.

Going forward, the first thing the Pelicans should do is put the muzzle back on LaVar Ball, Lonzo Ball’s father, who’s mouth, now freed from LeBron, is once again revved and running. For all of Lonzo Ball’s potential, he won’t be worth keeping around if his father is publicly subverting the team like he did during Lonzo’s rookie season with the Lakers.

Side note: ESPN just banned LaVar Ball from ever appearing on its station again.

With Zion appearing to be all in, the next thing the Pelicans need to do is woo Brandon Ingram into staying long term. Outside of Jrue Holiday, Ingram is the most established scorer on the team (Julius Randle is an unrestricted free agent). Ingram averaged 18 points and 5 rebounds with the Lakers last season and is arguably the biggest asset the Pelicans got from the trade.

There’s no talking about the trade, the cap space, or the potential of the Pelicans without giving new Executive VP David Griffin credit. Since he was hired, Griffin has established a sense of order over the chaos he inherited.  Thanks to his deal making Anthony Davis and his talents are now in L.A. It remains to be seen if Davis will flourish in the Lakers’ new offense. Stand on the perimeter, and watch LeBron do what he’s done for most of his career: clear the lane, drive to the rim, and kick the ball out to three point shooters. But the Pelicans are poised to embrace the Zion era.

To sum it up, the Pelicans took a terrible situation and turned it into Zion Williamson, 6 draft picks, and three players, two who are potential stars. President Trump might want to take notes from the art of that deal.