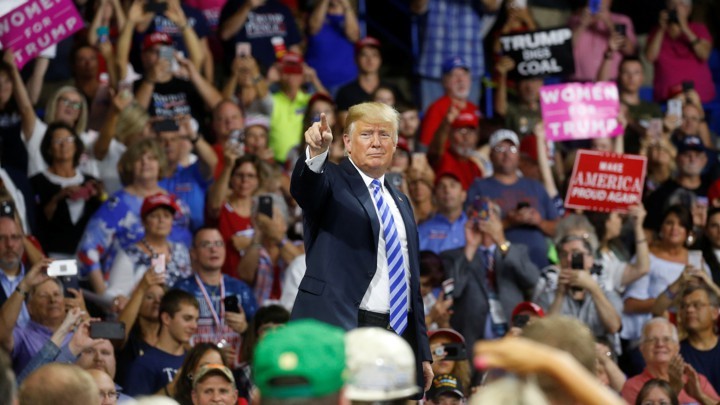 On Wednesday morning, the lead story on FoxNews.com was not Michael Cohen’s admission that Donald Trump had instructed him to violate campaign-finance laws by paying hush money to two of Trump’s mistresses. It was the alleged murder of a white Iowa woman, Mollie Tibbetts, by an undocumented Latino immigrant, Cristhian Rivera.

On their face, the two stories have little in common. Fox is simply covering the Iowa murder because it distracts attention from a revelation that makes Trump look bad. But dig deeper and the two stories are connected: They represent competing notions of what corruption is.

Cohen’s admission highlights one of the enduring riddles of the Trump era. Trump’s supporters say they care about corruption. During the campaign, they cheered his vow to “drain the swamp” in Washington, D.C. When Morning Consult asked Americans in May 2016 to explain why they disliked Hillary Clinton, the second-most-common answer was that she was “corrupt.” And yet, Trump supporters appear largely unfazed by the mounting evidence that Trump is the least ethical president in modern American history. When asked last month whether they considered Trump corrupt, only 14 percent of Republicans said yes. Even Cohen’s allegation is unlikely to change that.

The swamp isn’t easy to drain.

Fox’s decision to focus on the Iowa murder rather than Cohen’s guilty plea illustrates Stanley’s point. In the eyes of many Fox viewers, I suspect, the network isn’t ignoring corruption so much as highlighting the kind that really matters. When Trump instructed Cohen to pay off women with whom he’d had affairs, he may have been violating the law. But he was upholding traditional gender and class hierarchies. Since time immemorial, powerful men have been cheating on their wives and using their power to evade the consequences.

The Iowa murder, by contrast, signifies the inversion—the corruption—of that “traditional order.” Throughout American history, few notions have been as sacrosanct as the belief that white women must be protected from nonwhite men. By allegedly murdering Tibbetts, Rivera did not merely violate the law. He did something more subversive: He violated America’s traditional racial and sexual norms.

Once you grasp that for Trump and many of his supporters, corruption means less the violation of law than the violation of established hierarchies, their behavior makes more sense. Since 2014, Trump has employed the phrase rule of law nine times in tweets. Seven of them refer to illegal immigration.

Why were Trump’s supporters so convinced that Clinton was the more corrupt candidate even as reporters uncovered far more damning evidence about Trump’s foundation than they did about Clinton’s? Likely because Clinton’s candidacy threatened traditional gender roles. For many Americans, female ambition—especially in service of a feminist agenda—in and of itself represents a form of corruption. “When female politicians were described as power-seeking,” noted the Yale researchers Victoria Brescoll and Tyler Okimoto in a 2010 study, “participants experienced feelings of moral outrage (i.e., contempt, anger, and/or disgust).”

Cohen’s admission makes it harder for Republicans to claim that Trump didn’t violate the law. But it doesn’t really matter. For many Republicans, Trump remains uncorrupt—indeed, anticorrupt—because what they fear most isn’t the corruption of American law; it’s the corruption of America’s traditional identity. And in the struggle against that form of corruption—the kind embodied by Cristhian Rivera—Trump isn’t the problem. He’s the solution.

This article was originally published in The Atlantic