New research shows how toxic people manage to take charge and rise to the top. 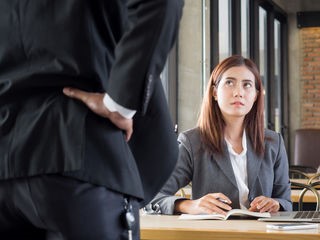 When you’re in a relationship with a toxic person, all you want to do is escape, at least once that toxicity is revealed to you. However, if your boss is toxic, it’s going to be pretty difficult to extricate yourself without sacrificing your livelihood. Perhaps your boss is constantly making demands on you that you have to race to meet, and you’re finding yourself working nights and weekends (without extra pay) just to keep your head above water. As soon as you’ve finished one task, another one that’s just as time-consuming lands in your inbox. It’s not just that your boss has it out for you, because this seems to be happening to your co-workers. Instead, it’s just a generally poisonous atmosphere your boss creates, leaving everyone feeling equally downtrodden.

We tend to think of toxic people in terms of their general negativity and tendency to cut you down. In close relationships, they make you doubt yourself so that you’re afraid to assert your rights. At work, though, the toxic people who supervise you display their aggressiveness and hostility in the form of those constant demands that keep you in fear of losing your job if you complain or object. Their power over you is absolute, and they know they can get away with making your life miserable. Your friends and family tell you that you look haggard and stressed, and you know your mental, if not physical, health is suffering. Throughout all this, you may wonder how the toxic people who rose to the top managed to reach their positions. How do toxic people get ahead? New research shows that the key to their “success” lies in their personalities, along with their impression-management skills.

University of Singapore’s Klaus Templer (2018) begins his investigation into why toxic people get ahead at work with the following observation: “We have seen them, and you have seen them too: Toxic people who progress and climb the career ladder, in organizations and in politics” (p. 209). Their toxicity may not be evident at first, but once they start their rise to the top, they’re hard to stop. Their urge to step over others leads them to succeed, at least in the eyes of those who have the power to promote them (and may have some of that toxicity themselves).

The personality traits that make up the Dark Triad become the core of the toxic personality, in Templer’s view. These include the tendency to exploit others (Machiavellianism), to have little feeling or regard for their fellow human beings (psychopathy), and to seek, to an extreme degree, being the center of attention (narcissism). The Dark Triad has been studied in a variety of contexts, including work settings, where the toxic employee was defined in all three facets. Templer believes that you only need one central quality to define the core of the toxic worker, and that is scoring toward the low end of the “honesty-humility” dimension.

There is considerable evidence that low honesty-humility does a good job of capturing such qualities as egotism, materialism, social “adroitness,” unethical decisions at work, delinquency and counterproductive behavior in the workplace, and lack of integrity. Their decisions are selfish; they are vengeful, and they cheat and lie. You might think their counterproductive tendencies would limit their ability to succeed in the workplace, but paradoxically, some of these toxic individuals are rewarded with the highest salaries and job promotions of all.

That paradoxical finding can be explained, Templer maintains, by considering the factor of political skill, or “a social competence that includes networking ability, social astuteness, interpersonal influence, and apparent sincerity” (p. 210). In Templer’s model, those with dark personalities who have this political skill are able to wrangle higher performance ratings from their bosses. Again, considering that some of the bosses themselves rose to the top via perhaps similar tracks, it makes sense that they would reward the people they see as like themselves.

Because Templer reasoned that both self and observer ratings of personality would be needed to assess the factors that lead toxic people to succeed, he included supervisor-supervisee dyads who completed a measure of the employee’s political skill. Participants were Singaporean nationals who ranged in age from 16 to 62 years, and they were employed at a variety of organizations in Singapore. The supervisees completed a measure of honesty-humility. They and their supervisors rated themselves on political skills using a well-established measure that assessed such qualities as time spent networking, knowing the “right” thing to do in social situations, paying close attention to the facial expressions of others, ability to communicate effectively, and being good at “getting people to like me.” Supervisors also rated the job performance of their employees and their ability to facilitate work in the team.

As Templer predicted, people low on honesty-humility (i.e., high on Dark Triad) were most likely to receive high scores on the measure of political skill. Self-ratings of political skill correlated significantly with supervisor ratings, suggesting that people are quite good at judging their own political skills, or at least are able to get others to see them as politically skilled. When this happens, supervisors award the employees with higher performance ratings. Thus, although not objectively better employees, these toxic individuals manage to advance into leadership positions by conning their bosses to give them the raises and promotions they’ve managed to finagle.

What about the truly humble, who aren’t trying to lie and cheat their way to the top? Templer found that there was a positive relationship between humility and team facilitation. In other words, as Templer concluded, “honest and dark employees have different means to receive positive performance appraisals” (p. 212). Although organizations are better off when they hire employees who will be honest and good team players, there may also be times when a company needs that toxic person to carry out such cost-saving measures as downsizing, closing entire departments, or winning showdowns with the union. Even though such individuals can increase employee dissatisfaction and workplace stress, executives may believe they have no choice but to give these people the power they need to get those jobs done.

What can you do knowing that your toxic boss made it to the top by virtue of his or her dark personality? Obviously, there’s little you can do to unseat this person, unless you can demonstrate out and out harassment or mistreatment and then can take legal action. Instead, Templer’s research suggests that you polish up your political savvy and, though you might find it difficult to do, play the impression-management game. You can also, if you wish to take the honest route, ensure that your ability to be a good team player shines through in your performance evaluations, where your collegiality wins the day.

Fulfillment at work, as well as in close relationships, depends on being able to have pleasant, non-toxic interactions. If you’re stuck with the opposite, your fulfillment might be less than ideal, but your ability to succeed doesn’t have to suffer.