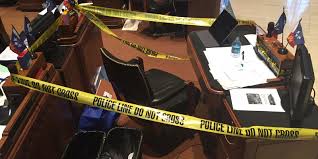 This article is not about former State Senator Troy Brown, except to the extent that the infamous last months of his tenure as a State Senator are the yardstick by which we might measure 1) why Louisiana is perennially at the “top of the worst” and/or the “bottom of the best” in every category, ranking, dubious distinction, status or presence that evokes Oregonians to look around then question themselves, thusly:

You see, Oregon and Louisiana are the only two states that allow certain criminal convictions by jury trial without a unanimous jury verdict. A 10 to 2 jury vote is all you need here and there. This 10-2 thing grew out of pure, unadulterated, unrepentant, turn of the 19th century, racism; and then – at that time – it was only a 9-3 vote. Yet, as ugly as this was,  just 44 years ago, the Louisiana Constitutional Convention chose to carry on this, what should have been, embarrassing provision of “law” – albeit, amending it to the present 10-2, still racist and not much better.

But, thank God that a bill authored by J. P. Morrell, D-New Orleans, was signed into law by Governor Edwards authorizing a referendum/vote of the people this November 6th to amend the Louisiana State Constitution and do away with the 10-2 hate-inspired relic and usher in the unanimous jury verdict provision and evoke Oregonians to look around, then, answer their own question, supra, thusly:

Hopefully, one down with many to go – one of which involves what this writer verily believes is another black-eye on the face of this state because of the double standard and implicit bias revealed in a comparative analysis of the matter of former Sen. Troy Brown, D-Napoleonville vis-a-vis the matters of Rep Stuart Bishop, R-Lafayette, and Sen. Norby Chabert, R- Houma.

Legislators In Barroom Brawl at 1:00am?

Bishop is chairman of the House Natural Resources and Environment Committee while Chabert chairs the Senate Natural Resources Committee. They were engaged in a 1:00a.m. “drunken barroom brawl” cavalierly disguised as a fistfight. It seems they were “talking shop” when as the Governor observed as to that particular time, “every now and then, people get too passionate, and things can get out of hand” and “…they are good friends with one another.”  This writer agrees with the Governor as to his former viewpoint and of the latter, no knowledge, though, friendliness makes no difference herein. They were drinking alcohol at 1:00a.m; and, indeed, they got too passionate, and, clearly, things did get out of hand, and, they violated the law, committing misdemeanors in the following particulars:
(1) Engaging in a fistic encounter;  (2) Addressing any offensive, derisive, or annoying words to any other person who is lawfully in any street, or other public place; or call him by any offensive or derisive name, or make any noise or exclamation in his presence and hearing with the intent to deride, offend, or annoy him, or to prevent him from pursuing his lawful business, occupation, or duty; (3) Appearing in an intoxicated condition;   (4)

Interruption of any lawful assembly of people.

That their behavior is illegal is borne out by several news reports of interviews of people intimately acquainted with what happened.  Downplaying – citing friendship – acknowledging that “It doesn’t exactly reflect well on the House or Senate or State Government” – declaring “it’s something we can all get past” – cracking wise by legislators – placing crime-scene tape around Bishop’s capitol desk – stating “there’s a lot of spirited debate”  in this bar, (this writer certainly agrees with the “spirited” aspect) (pun intended)  – making joking references – looking at it from the good ol’ boys perspective – or any other considerations that are not of the same character or seriousness as was that perspective by which the Senate looked at and acted in the Troy Brown matter, is clearly a double standard.

When news first broke of the Troy Brown matter, part one, punching his paramour in the eye, it seemed like he had laid a rough path that he would have to travel to offset his predicament. Seemingly everyone, including the Senate, generally, viewed the scenario in the same way, i.e., absolutely horrible “PR,” something to be remembered at re-election time, courthouse  proceedings and disposition thereof, cheating on his wife (a woman scorned) and, perhaps, some Senate reaction in accordance with its rules.  Then, part two, as to biting his wife, (shortly after part one), it seemed that road had become so formidable now, he would need to marshal every possible thing that he could in framing a defense that could possibly help him to avoid the harshest measures that could befall him both in the courts and in the Senate and, also, in his personal life.

He hired attorneys to assist him in all matters, being zealously defended against issues including expulsion from the Senate. For months, he vigorously defended himself against it up to the time when shortly before an expulsion hearing was to be held, he decided to resign his seat. In doing so, Troy Brown stated that “he changed his mind because he didn’t think his colleagues would treat him fairly in an expulsion hearing.”

But, nonetheless, he had pleaded guilty to two misdemeanors as per parts one and two, supra. He resigned.  His Senate goose was cooked.  This writer does not know what became of the paramour but does know that he and his wife are living together today.

The last time a Senator was expelled was 35 years before Troy Brown’s expulsion. That guy’s expulsion was due to the very serious federal felony crime of extortion for which he was sentenced to five years in federal prison. The rules of the game in the Senate were clear here – felony conviction, you got to go!

It was not so clear in Troy Brown’s case, no felony, two misdemeanors. However, eight misdemeanors, as described above, were committed by the two legislators – four each; but, somehow, in spite of the police being summoned, these men just walked out of the bar and most likely drove away (does someone think DWI?) The owner of the bar said, according to news reports, that ”he was told in the morning that someone with the group broke up the altercation … Nothing was broken and no one was hurt, but the bartender called the police…” However, Baton Rouge police said, affirmatively, they had no record of responding to the incident or receiving any calls about it. (Contradictory and/or something else?)

Originally, this writer did not put much stock in what Brown said as the time for expulsion hearing got closer; and, sure enough, expulsion!  However, his believing that he would not be treated fairly was unsettling at best. He knew his colleagues better than the general public did. It is not certain that the media treated him fairly. In that moment of passion when things get out of hand and someone is trying to hit someone else, unless you’re a boxer, a punch may land anywhere on any person – not just in the eye. And also, when a scorned woman is on a man’s back choking his neck and biting is the easiest way to prevent being choked – so, he does so bite her. What follows in the heat of this passion is the woman, so scorned, calling the police on the man she was choking. All this arises from part one without which there is no part two and likely no representations of Troy Brown as a “woman beater.” This “punch a woman in the eye” and “biting a woman” sounds terrible, yet sensational, on TV and looks bad as written, yet sensational; but, in reality, it may not have been that way at all.

Looking at the matter of the Senator expelled in 1981, there’s a world of difference in that case and Troy Brown’s. But, in looking at the matters of Brown (ugly, but highly personal in nature and media driven)  and the matter of the legislators (ugly, involving both state legislative bodies to whom self-serving regrets were directed along with respective constituencies – this writer sees a double standard and real biases, as Brown received the ultimate punishment as did the extortionist for so much less of an infraction of the rules – yet, the two “brawlers” were exalted, in a way, because they provided levity, humor and a lighter touch to some otherwise haggling Senate doings – and face not a scintilla of discipline. This is wrong! This is wrong!

If those two legislators had been Ted James, D- Baton Rouge and Troy Carter, D- New Orleans, this writer believes they would have been treated like Troy Brown, arrested, charged, media villains, Senate scourging and biased reactions.  Since the fistfighters, shamefully, did not apologize to the state as a whole and, thus, not to this writer, there’s more to be pissed about. Therefore, you Black legislators, who condemned Troy Brown, and you who supported him, if any, it is time to direct your condemnation and castigation as well as that of the entire Senate and the entire House to these two members of the legislature who have brought ill repute down upon you. You must demand discipline be meted out to them. This writer can visualize these legislative bodies not doing it in their entirety, but can not visualize you letting this go like it should have no meaning to anyone, especially to us Black people.

If one looks at the disparity in the Senate treatment of the Troy Brown matter and those of  Stuart Bishop and Norby Chabert, the bias therein is absolutely and unmistakably clear to this writer and should be also to each of you.  One thing for certain, this is just another episode wherein a black eye on the face of Louisiana is exposed to the world.

“But, On The Other Hand”

leave Oregon by itself