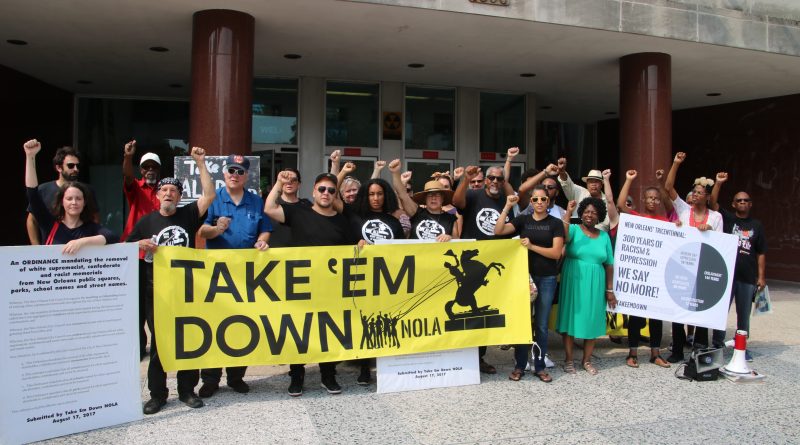 Rocked by shocking political news just ten days into her administration, New Orleans Mayor LaToya Cantrell, the city’s first female mayor and first African-American woman elected to the office, took a sunbath, courtesy of Take Em Down NOLA (TEDN) organizers. If sunshine is the best disinfectant, TEDN flooded the steps of City Hall recently with a proverbial blinding light on secret meetings they allege Cantrell has held with neo-Confederates who are advising her on what to do with Confederate monuments that were removed from public spaces.

TEDN is an anti-white supremacy coalition which has worked for nearly four years to rid New Orleans of symbols honoring slave-owning white supremacists. TEDN’s mission is to remove all symbols of white supremacy from the crescent city and support activists, worldwide, who want to do the same.

Former Mayor Mitch Landrieu, who signed the ordinance into law, raised the ire of the group, a few months ago, when he took credit for the removal of four Confederate-era monuments: Landrieu never once mentioned the work and political pressure exerted by TEDN. Members of the group confronted Landrieu at a book signing for his new tome, In the Shadow of Statues: A White Southerner Confronts History.

TEDN learned of Cantrell’s meetings with members of the Monumental Task Committee, ( MTC) Inc. last month. After a letter to then-Mayor Elect Cantrell went unanswered, TEDN decided to take their demands to the court of public opinion.

The MTC is a group dedicated to the preservation of the city’s historic monuments. Its founder, Pierre A. McGraw sued Landrieu and the City of New Orleans before the ink was dry on the new law, in an attempt to stop the city from removing the monuments.

At one point McGraw argued that the monuments are “external symbols of his own distinctive culture,” according to the judges’ denial of his request for a temporary restraining order.  He was joined in the lawsuit by the Louisiana Landmarks Society, and Beauregard Camp No.130, Inc., a radical group of Confederate flag-waving white supremacists.

“We are calling on the mayor to leave the decision about what to do with the removed statutes to a public process,” the university professor continues.

Some in the African-American community have criticized TEDN for waging such a fierce battle against Confederate-era monuments. They say the black community has more important issues to confront.

“Some folk say flags, statues, street and school names are not important. Yet, we know they are; which is why we take such pride in symbols that connects us to communities, such as mascots, alma maters and sport teams. Symbols are used intentionally to bond people around cultural and political values, with an intense identity anchored in pride. Yet, when a symbol aims to bond people around white supremacy and maintaining a white power structure, this is a degrading slap in the face for all descendants of enslaved people,” says TEDN organizer Angela Kinlaw, an education administrator.

“These racist monuments promote psychological trauma for those who face systemic racism everyday and they are designed to tell descendants of enslaved people, to stay in a place of compliance and low expectations. It’s a new day, and Take Em Down NOLA is determined to see these racist, oppressive symbols come down!” Kinlaw says passionately.

“TEDN is also advocating for economic parity and a better quality of life for New Orleans’ black communities,” Suber adds.

Calls to Mayor Cantrell and the MTC were not returned at press time.

One thought on “GROUP CALLS OUT NEW MAYOR FOR SECRET MEETINGS”