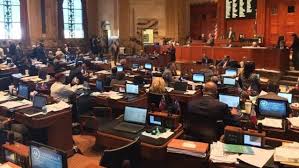 By Definition — Insanity Is What We’re Doing Now

Hey, remember that temporary sales tax increase that the governor and legislators forced upon us with the promise that it would in fact be temporary, and how in the meantime they’d get the state budget under control so that another temporary tax or trust fund raid would never be needed to balance the budget again? Well, they kind of lied about that one.

Remember back when Louisiana had a food stamp program, a reliable grant called TOPS for college students, fully funded district attorneys’ offices across the state, and a Corrections Dept. that could afford to house all the people sitting in its jails? Well, at the rate our governor and legislators are going, that’ll be one of those once upon a time questions asked around the state in the coming years.

Fact: that temporary sales tax that’s turning out to be not so temporary is set to expire at the end of June, leaving a $650 million hole in the budget. Our governor and legislators spent most of the previous two special sessions filing that hole with partisanship or fighting over how much to increase the sales tax, permanently or for the next two years. To be clear, permanently means forever, as in a tax that was supposed to be a temporary stop gap could, at one rate or another, become a way of life for residents and whoever decides to visit and shop in this state.

Remember when we had a governor and legislators that didn’t lie to or play games with us? Me neither.

If insanity is doing the same thing over and over while expecting different results, then is having a 3rd straight special session insane?

Other facts: if this 3rd special session ends in an impasse, the aforementioned once upon time questions will become a reality. TOPS will receive its 999th cut, one away from the 1000 that’s said to result in death. The Dept. of Children and Family Services says it’ll be forced to lay off a 1000 people and end the food stamp program. The Dept. of Corrections says it’ll have to release up to 1,800 prisoners a month, and district attorneys across the state will lose the funding required to timely prosecute cases. In other words, our state will become an even bigger dump.

So we have a choice – well it’d be wrong to say we have a choice, because that would imply that we citizens actually have some type of power over what’s going to happen during this 3rd and final session. But a choice will be made. It’ll be between letting the sales tax expire and allowing the cuts to ensue or increasing the sales tax so that lesser cuts are implemented. In a state known for incompetence this is an all-time high. But Louisiana is no island. The impasse between the two parties is a microcosm of what’s going on nationally, where Republicans and Democrats are becoming so embittered that compromise is now a dirty word.

Last questions: With all that’s gone down, if we keep electing the same ole people into office but expecting different results, does that make us insane? Does that make us responsible for the ensuing chaos and partisanship?