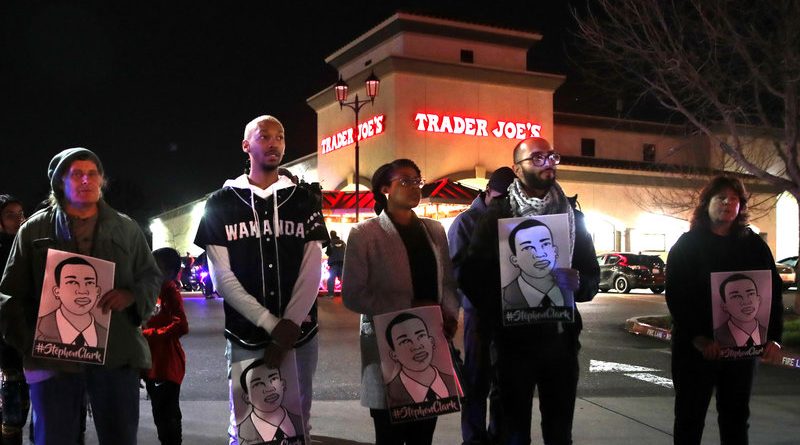 Tensions continued to boil over in Sacramento this month in response to the killing of Stephon Clark one year ago. Police shot Clark in his grandmother’s backyard while he was holding a cellphone. The official autopsy showed that he had been shot seven times, three in the back. The two officers were responding to a 911 call about a man in a hoodie breaking car windows. They thought that Clark had a gun when he turned around to face them on what turned out to be his family’s property.

The District Attorney, Anne-Marie Schubert, announced last weekend that the officers would not be charged. This determination was based on the conclusions of an internal investigation by the Sacramento Police Department. “The law requires that we judge the reasonableness of an officer’s actions based upon the circumstances confronting them at that moment of time,” Schubert said. And the officers who shot Clark “honestly, without hesitation, believed he had a gun.” The California Attorney General announced a decision not to press charges on Tuesday.

Yet there is still the possibility that this tragedy will result in positive change. Clark’s family is supporting AB 392, a recently reintroduced bill seeking changes to the standards for police use of deadly force. These changes are warranted, despite the protests of some law enforcement officials, for the simple reason that officers are people, too.

The two officers who shot Clark may have honestly and without hesitation believed that he had a gun. But knowing what we do about how people perceive things, there is good reason to think that their perception of the situation was shaped by background assumptions they brought with them to the chase that night.

Though we seem to move about the world passively receiving perceptual information from our environment, what we are actually doing is actively anticipating incoming sensory information on the basis of our prior beliefs and experience. Perception is part prediction. Support for this view comes from experiments involving induced hallucinations. Researchers conditioned subjects to expect a light to be paired with a tone. When they showed them only the light, subjects reported hearing the tone as well. Because they had come to expect the two to go together, perception of the light triggered a false perception of the tone.

Perhaps it is too much to say that the officers hallucinated a gun in Clark’s hands that night. (Perhaps not.) But it does not seem unreasonable to claim that they may have thought they saw one, in part, because they expected to. Along with their department-issued firearms, they brought with them to work that night beliefs and expectations about who else carries firearms. And these likely influenced what they saw in the heat of the moment.

Just as our perceptions are influenced by prior beliefs and expectations, these priors are shaped by stereotypes we pick up from our cultural milieu and past life experience. And there is reason to think this is just as true of police officers as it is of the rest of us. Racial stereotypes are no exception, and they can lead to false beliefs and expectations with no basis in reality. Evidence suggests, for example, that the public is overwhelmingly likely to picture a drug user as black, even though it is vastly more likely that a drug user in this country would be white. Similarly, white men are twice as likely to own guns than nonwhite men in this country, yet the stereotype of an armed criminal looks a lot like Stephon Clark. By influencing what one would expect to see in his hands, this stereotype shapes what a reasonable police officer would have perceived as the shiny object he is wielding in his grandmother’s backyard.

Lawmakers in all corners of this nation would be wise to keep the reality of how human perception works in mind as debate renews over the definition of “justifiable homicide” and “reasonable” use of force by police officers. What seems reasonable to an officer in the moment is likely shaped by factors having nothing to do with the circumstances. And given that we, the public, have authorized them to use deadly force in the name of our safety, it does not seem unreasonable to require that they exhaust relevant alternatives and exercise it only when absolutely necessary. When the stakes are deadly high, the perceived grounds for action had better be based in reality.