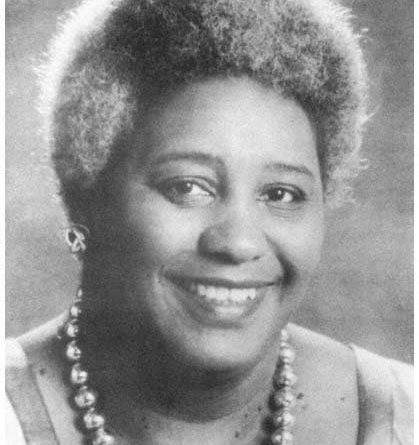 The New Orleans Jazz Orchestra will host a three (3) day celebration of the legacy of Oretha Castle Haley, the Civil Rights – Community Organizer – Political Strategist – Health Reform Administrator who mentored and developed a generation of future leaders in the New Orleans African-American community.

The series of events, to be hosted at the New Orleans Jazz Market (1436 Oretha Castle Haley Blvd.), begins at 7 PM on Wednesday, February 20th with a Legacy Panel discussion featuring civil rights, community, and cultural activists.  On Thursday, February 21st, students will interact with members of the New Orleans Jazz Orchestra as they rehearse for the signature event honoring Mrs. Haley.

The culminating show, dubbed The Interception, will be held on Friday, February 22nd. It will feature the full New Orleans Jazz Orchestra led by Artistic Director Adonis Rose with special musical guests Davell Crawford and Topsy Chapman and spoken word icon Kalamu ya Salaam.  The show will focus on the lifetime of activism Mrs. Haley demonstrated in the spirit of Dr. Martin Luther King, Jr.

Friday evening’s event will also feature a visual art showcase curated to honor the legacy of Mrs. Haley.  The Legacy Panel is free and open to the public with live music to follow.  Tickets for Friday’s concert are available at www.thenojo.org. Valet parking recommended.

The show – The Intersection (at the New Orleans Jazz Market located at the corner of Oretha Castle Haley Blvd. and Martin Luther King Blvd.) – will focus on the lifetime of activism Mrs. Haley demonstrated in the spirit of Martin Luther King.

Oretha Castle Haley grew up in New Orleans after moving from Tennessee with her mother, Virgie Castle – the bartender at Dooky Chase Restaurant and her Longshoremen father Johnny Castle. After graduating from Clark High School, Oretha attended SUNO. Fueled by the student activism of the early 1960’s, Oretha Castle left school and became active in the boycott of Dryades Street, led by Rev. Avery Alexander then head of the Consumer’s League.

Oretha joined the Congress of Racial Equality (CORE) and became the lead organizer in New Orleans. Along with fellow CORE members Rudy Lombard, Don Hubbard, Dave Dennis, Matt Suarez, Ike Reynolds, Cecil Carter, Dodie Simmons, her sister Doris Castle and several others; CORE joined in on national Civil Rights efforts including the Freedom Rides to integrate interstate transportation in 1960 and the Freedom Summer in Mississippi, which registered thousands of Black Mississippians in 1963.  She married Richard Haley, a lead field organizer for CORE during this period. The couple had four male children.

Local efforts in Civil Rights revolved around voter registration and integration of public spaces. The first sit-ins took place at McCrory’s.  A signature march was organized in 1963 when Rev. Alexander was drug up the stairs and Oretha’s sister Doris was carried out in the chair she sat in at the City Hall cafeteria testing the right to be served in the City’s official seat of government. Thousands of Black New Orleanians were galvanized through intentional organizing efforts led by Oretha, Arthur Chapital Sr. head of the Urban League, and Rev. A. L. Davis, and eventually City government desegregated City Hall.

With the passage of the Voting Rights Act in 1965, Oretha began to focus on developing Black political power in New Orleans that was closely tied to community equity issues. She is credited with helping the development of two of the City’s most powerful political organizations the Southern Organization for Unified Leadership (SOUL) and the Black Organization for Leadership Development (BOLD). She began to emerge as one of the city’s top political strategists in the late 60’s and 70’s helping Mack Spears become the first elected School Board member and along with Don Hubbard managing successful campaigns for Dorothy Mae Taylor the first Black woman in the Louisiana Legislator and later the first African-American female to sit on the New Orleans City Council.

In addition to helping early efforts for African Americans to gain elective offices, Mrs. Haley encouraged accountability to the needs of the community. She had a passion for education establishing the Learning Workshop – an early childhood day care center and later organizing the Parent Community Alliance – a parent based public school advocacy group.

In the area of healthcare, Oretha founded the Sickle Cell Anemia Foundation to focus attention on the disease, which impacted African Americans. She would later become the first female lead administrator at Charity Hospital where she initiated a series of equity reforms which dramatically changed the public hospital’s culture.

Her untimely death from cancer in 1987 left a gaping void in the New Orleans African-American community. Her spirit of activism and commitment to Black empowerment lives on today in the dozens of people she touched, taught and mentored in her life of service to the community.

NOJO is proud to honor, reflect and encourage continued dedication to the goals for which she lived and died. The entire New Orleans community is invited to participate in the Tribute to Oretha Castle Haley.

About the New Orleans Jazz Orchestra

The New Orleans Jazz Orchestra is a nonprofit organization that features a Grammy award winning big band which performs and partners with other organizations around the world; provides inclusive services to local nonprofits and musicians as well as creative, educational opportunities for youth; and operates the New Orleans Jazz Market which is the first modern stand-alone facility built in New Orleans specifically for immersive 360 jazz experiences. More information can be found at www.thenojo.org.