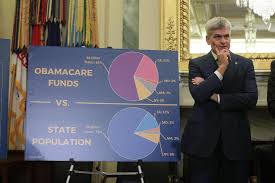 Let Democrats tell it, Obamacare is great for the American people. It provides coverage to those with pre-existing conditions, expands Medicaid to cover more of the poor, and extends subsidies to others who have trouble paying premiums.  To do so, though, it forces millions of other American people to help pay for it. Plus it lets the federal government decide what type of health care is appropriate.

Cassidy’s bill would also provide relief to those American people. Under his bill, starting in 2020, millions wouldn’t be forced to buy health insurance they may not want or need or face a penalty if they don’t. For those who do want insurance, the federal government wouldn’t be able to tell them what type of insurance to buy. If that was all it did, though, Obamacare as we know it would probably still survive. But Cassidy’s bill also allows states to waiver-out of requiring insurance companies to cover those with pre-existing conditions, and it ends the Medicaid expansion. In place of the funding used to pay for both, states will get block grants that would expire in 10 years.

Cassidy’s bill basically puts Obamacare in a sleeper hold and slowly squeezes the life out of it. Whether this is a good or bad thing depends on your political philosophy.

If it isn’t a right, then insurance companies should be able to market healthcare like any other product. If that means those with greater health problems pay more than those with lesser problems, then so be it. Or if insurance companies raise premiums for the insured to offset the cost of the uninsured who show up at emergency rooms and bail on the bill, then so be it.

This fundamental role, or non-role, of government is not what our politicians are discussing, though. Instead, they’re treating us to a hyperbole-fest about intentions. We’re told evil Republicans just want to make healthcare a privilege for the rich, or that Democrats want to punish success and oversee a form of socialized medicine. That’s no surprise. Long ago, both parties resorted to dumbing issues down to inflammatory stances that prevent us citizens from determining how their ideologies play out in practice.

But at least Sen. Bill Cassidy is no longer a liar. He’s proposed a replacement. This replacement would cost Louisiana a billion or two in federal funding by re-defining who’s considered poor enough to qualify for Medicaid, but the state may not need that much money if it’s no longer obligated to adhere to Obamacare’s poverty standards. This may or may not be a good thing, depending on your political philosophy. One thing is for sure, though, that type of discussion will not take place next week when Cassidy’s bill is considered.