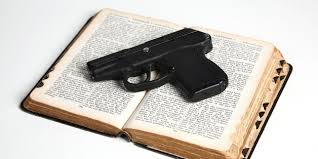 My pastor is hesitant about letting me bring the gun into church. Louisiana law requires I get his permission first and that he tells the congregation. Typically, this right to refusal is reserved for property owners, and with churches being designated as the house of God, i.e. His property, I don’t see why my pastor has any say over this. Whether or not I bring my gun into church should be a matter between the Lord and me, not me and my pastor. But since the Lord doesn’t pay taxes, the state may not recognize Him as the legal owner, despite the spiritual claim.

If I get pulled over in Louisiana on my way to church, or on my way to wherever, I don’t have to hide my gun under the seat or in the glove compartment when the officer approaches my vehicle, thanks to Louisiana being an open carry state. Instead, I can just tell the officer that I have a gun in the car. This will be a simple matter, a routine stop devoid of controversy as long as I’m not black.

If I’m black, a few things will, and may occur, the first thing being the officer asking me to step out of the car. This is also known as demanding. Once I’m out of the car, the officer will then inspect the gun to see if any of my inherent criminality has rubbed off on it. If he’s satisfied that the gun hasn’t been tainted (stolen), he’ll let me go. If not, he’ll probably arrest me, and/or take the gun. 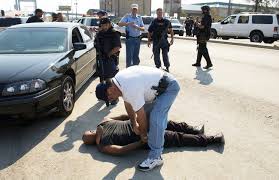 In Louisiana, I don’t need permission to openly carry my gun, but I do need permission to carry it concealed. This extra perk is a quid pro quo on behalf of the state. I get to comfortably carry my gun in my jacket or under my shirt, and the state gets to extract money from my pocket via the fees for the required gun safety class and permit.  Apparently, this is the only explanation since there’s no practical reason why a class and permit are required to conceal carry as opposed to carrying openly.

If you are a convicted felon in Louisiana, you don’t have to worry about a permit for a while. That’s because you don’t get to own a gun for at least 10 years after you’ve been released from prison.

There’s been a lot of talk about guns and gun control ever since a man killed over 50 people with one, or some, in Las Vegas last week. Here in Louisiana, we don’t do mass killings.  Like most states with a high number of gun owners, we spread our killings out over time.  According to one study, a person is killed every 10 hours by somebody with a gun in Louisiana, and from 2001-2010 the state led the nation in gun related deaths. Some would say this is why some type of gun control is needed, that there are too many unstable people with guns. Others would say this is why gun regulations need to be more lax – so more people can buy one, or some, and defend themselves.  Louisiana law affords that dilemma.

3 thoughts on “A Look At Louisiana’s Gun Laws”