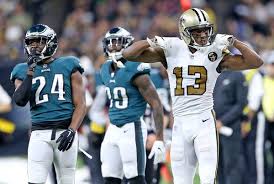 Ready for Some Football?

– Last time the Saints went to the Super Bowl, they were fighting for home field advantage with a team who’s offense was just as potent as theirs. Back then it was the Vikings, this year it was the Rams.

– Last time the Saints went to the Super Bowl, they lost regular season games to the Bucs, Cowboys, and Panthers. This year, (yeah, I know you’ve heard this one) they did the same.

Speaking of those Eagles, how does the old saying go? To be the champs, you got to beat the champs. Well here come the champs, back for round two in the Super Dome. For the defending champs, the first round didn’t go well at all. The Saints whipped the Eagles 48-7 in November. It was an epic beatdown. The loss dropped the Eagles to 4-6, and left their fans wondering whether their season was over, while Saints fans were wondering what the weather would be like in Atlanta for the Super Bowl. But things have changed. These aren’t the same Eagles, and these aren’t the same Saints.

Since that whipping, the Eagles have gone 6-1 including the playoffs. Two of those wins have come on the road against the Rams and the Bears, top notch teams. Their only loss was in overtime to the Cowboys on a flukey tipped pass. These rejuvenated Eagles are averaging more of almost everything now – more yards, more points, more touchdown passes, more pressure on the QB. They’re giving up less sacks, and fewer big plays down the field too. Most of the turnaround has to do with them adjusting to all the injuries they had on defense and finally getting Carson Wentz off the field.  Wentz had been pretty average since coming off his ACL injury, but enter Nick Foles, last year’s Super Bowl MVP, and suddenly this team has got the eye of the tiger again (coincidentally they’re from Philly).

At the same time, the Saints have been struggling on offense. Back then, that win over the Eagles was the 3rd straight game the Saints had scored over 40 points. They haven’t come close to scoring 40 since then. The defense has been great though. Only one team has managed to score over 20 points in the last 6 games, which is why the Saints managed to go 5-1 and virtually end the season’s of both Pittsburgh and Carolina. We won’t count the season finale. Yes, it was disturbing, but it was a meaningless game.

The rematch should be much more competitive than the first time. Should you be optimistic or concerned?

Reasons to be optimistic:

3)The average fan consumes 2.5 more drinks tailgating outside the Dome before late games, translating to a 5.0 increase in crowd noise (this has not been scientifically verified).

3) The defense is only giving up 80 yards on the ground.

4)The Eagles are depending on an undersized 35-year-old Darren Sproles to run the ball.

Why Rocky III should have you concerned:

Remember Rocky, that overachieving boxer from Philly who managed to beat better fighters on pure heart, grit, and yo Adrian alone?  Well in Rocky III, Rocky was the defending champ in need of a wake-up call, much like the Eagles were when they came to the Dome. Rocky got his when he ran up on the hungry Clubber Lang (Mr. T) and got knocked out in the 2nd round. It was an epic beat down. But by the movie’s end, Rocky was rejuvenated and bobbing and weaving with the eye of the tiger again. In the rematch, he punished Lang before knocking him out in the middle rounds.

You see these kind of redemption tales play out in sports all the time, where the team that got blown out the first game comes out hungry and gets revenge the second time around. The Eagles are trying to be that team. The Saints should be wary of that.

Why Rocky III shouldn’t have you concerned:

This ain’t no movie. The Eagles can have the eyes of 10 tigers, but the Saints will have the voices of over 70,000 fans in the Super Dome, and despite what’s happened since their first meeting, the Saints are still the better team.

The Saints are all in for the Super Bowl this year. Look for them to cash in on their first hand come Sunday. Saints put down an Eagles team bent on revenge 31-20.

One thought on “Saints, Eagles, Playoffs, In the Dome.”