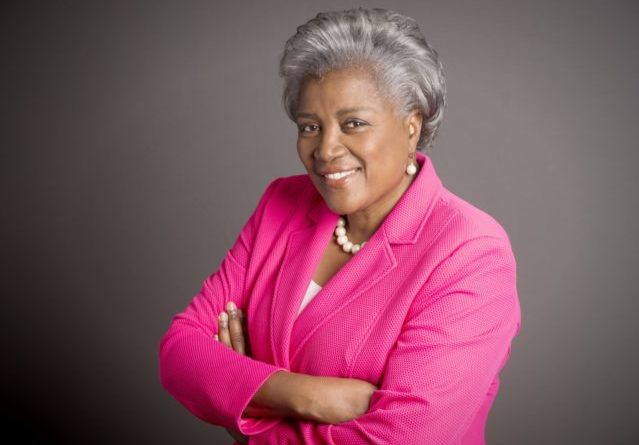 Brazile will answer the seminal question, “Can The Democratic Party Continue To Usher African Americans Into The American Mainstream?” The Kenner native’s topic is informative amid attempts to suppress the vote of people of color and to ban them from immigrating and seeking American citizenship by Republicans and the Trump Administration.

Brazile’s lecture is timely because in the wake of the mid-term elections, the U.S. Congress has grown more diverse.

“When I got the call from SUNO inviting me to speak, I was honored. I’m going to talk politics and power. The way to change power as demographics change is to ensure that our policy priorities are in both state and federal government budgets,” she explains.

“We’re at a tipping point in American politics, the political observer adds. The midterm elections last fall, “transformed our lives,” Brazile says; enumerating the growth of the U.S. Congressional Black Caucus to 55 members, five of whom chair committees in the House of Representatives and 20 who sit on subcommittees. `

“Congress is like a jambalaya but we need more ingredients,” she continues. Brazile’s comments reveal her philosophical approach to politics, which she likens to New Orleans food, as outlined in Cooking With Grease: Stirring the Pots in American Politics, which forecasted the changing demographics in American politics and drew parallels to the city’s cuisine.

Today, Brazile is still stirring the pots in American politics. She still serves on the national Democratic National Committee (DNC), “to make sure the rules reflect our values.” Brazile was interim chairperson during the 2016 DNC email scandal, which led to Debbie Wasserman Schultz’s departure from overseeing the organization.

“We have to be present in this moment,” she says of the African-American presence in politics. My father used to say, ‘We’re in a world of sorrow. I didn’t understand it then but I do now. We are experiencing a backlash and retrenchment that we didn’t prepare for.”

Clearly, the backlash stems from neo-Confederates who were angry over the election of Barack Obama, America’s first African-American President. In retribution, a minority of voters, with the help of hacked emails and a massive disinformation campaign and voter suppression tactics, elected Donald Trump who injected a political retrenchment of white supremacy and dominance into the bloodstream of American politics.

Since taking over the White House, Trump has fostered anti-black & anti-brown policies, in an effort to stop the browning of America and to maintain a system of apartheid under white rule. To accomplish his goals, Trump has ignored norms and equal justice policies put in place during the Obama Administration. His actions have amounted to a slow roll back of democratic ideals and a preference for authoritative rules.

“We have to fight for our democracy. We’re connected on the internet but not connected to our local government. It’s not good enough to say we want inclusion. We must have the policies to match.” Brazile offered as an example, the Rooney Rule.

The Rooney Rule is a National Football League policy that requires league teams to interview ethnic-minority candidates for head coaching and senior football operation jobs. It is sometimes cited as an example of affirmative action, as there is no quota or preference given to minorities in the hiring of candidates. It was established in 2003, and variations of the rule are now in place in other industries. Most recently, five African-American NFL head coaches have been fired post-season and one hired.

“The Rooney Rule will happen but I say one candidate is a token and two is window-dressing,” Brazile explains. “We have to prepare ourselves for the 21st Century. We’re not there yet. We’re not getting anything in this growing economy.”

Brazile calls Donald Trump, “a huge threat” to American democracy. She took umbrage at his “foul pitches” against the democrats and his attacks on legislative investigations. “Donald Trump is serving 30 percent of the American people and he’s aligned himself with the far right. He’s basically told the legislative branch, ‘How dare you investigate me.’ We’ve got a problem but we’re going to deal with it,” Brazile concludes.

In addition to being a political strategist, Brazile is an author, campaign manager, adjunct professor at Georgetown University and Howard University.  Brazile’s latest book is Hacks: The Inside Story of the Break-ins and Breakdowns That Put Donald Trump in the White House.

She is also profiled in the book, For Colored Girls Who Have Considered Politics, along with contemporaries Yolanda Caraway, Leah Daughtry, and Minyon Moore as told to Veronica Chambers.

Donna Lease Brazile holds the historic distinction of being the first African American woman to direct a major presidential campaign. She was the campaign manager for Al Gore in 2000.

She is the Vice-Chair of Voter Registration and Participation at the Democratic National Committee, as well as the former chair of the DNC’s Voting Rights Institute.

She earned a bachelor’s degree in Industrial Psychology from Louisiana State University in 1981, and was a fellow at the Institute of Politics at Harvard University’s John F. Kennedy School of Government. Brazile also provides political commentary for CNN and ABC.

The Charles Frye Memorial Lecture is sponsored by the SUNO Center for African-American Studies, the Amistad Research Center, and the SUNO School of Social Work.