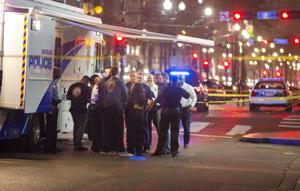 Gun violence is an every-weekend kinda’ thing in NOLA.  But last weekend’s violence was a cause célèbre.

Headlines should have read, “NOPD and State Police combine, shoot five innocent bystanders at bus stop on Canal St.” Although this was not a repeat of the Danziger Bridge tragedy, when rogue NOPD officers shot six people just after Katrina, the similarities are strikingly similar. Far worse than the Danziger shootings, where police were blood-thirsty criminals intentionally firing on unarmed citizens, the Canal Street bus stop shootings are the result of dreadful police policy which endangers and kills instead of protecting and serving.

Even if the dead gang member from Houston, who acted recklessly and without regard for human life around him, did open fire when he saw a police officer exit a police car like police say, the question remains whether NOPD actions were proper. Also, is this evidence of NOPD’s need for broad latitude in the notion of  ‘To protect and serve’ the innocent citizens of our great city?

’Cause the police might have shot five innocent bystanders in this “gunfire exchange.”  Are we to believe that this violent felon with a gun just started shooting randomly on Canal Street?  Or did the officers’ decision to approach and apprehend a suspicious subject create the violence?  This suspicious subject turned out to be a really bad guy.  The kind of guy whose freedom puts us all at risk.

The complexity of police work is exemplified in this event.  Police work is dangerous, and only special people should be allowed to roam the streets looking to curtail illegal activity. Internally, police departments must constantly monitor officers’ actions, lest chaos erupt.  And chaotic events when officers kill a bad man – but injure five innocent bystanders – are and always should be against standard NOPD protocol.

Officers do not engage in high-speed chases on city streets in order to protect the lives of the innocent. Similarly, these officers should have chosen better circumstances to take down this suspect. Precisely because the guy they suspected might just start shooting when engaged by police is the reason this should never have happened the way it did.

If the same bad guy was at the Zulu parade, would the officers have acted the same way?

This is an opportunity for Mayor Cantrell and Chief Ferguson to gain the public’s trust.  After Danziger, the NOPD engaged in an elaborate cover-up:  Public service was swiftly supplanted by self-aggrandizement. No matter whose bullets pierced the bodies of those people at the bus stop last week, police actions caused them to go airborne.

For healing and to more effectively move forward, the NOPD must first clear the air.  Then, apologize for the lapse in judgement. Next, reiterate to officers that public safety is job No. 1.  Anything less is more Danziger.