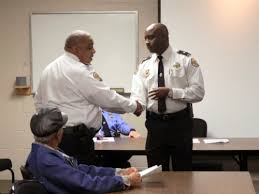 Mayor LaToya Cantrell named Shaun Ferguson as the new chief of the NOPD.  By all accounts, Ferguson is well-qualified to lead the department.  He is universally liked within the department and has a strong pulse on the community.  Mayor Cantrell deserves credit for this selection. Ferguson seems capable of doing a great job. But what his philosophy and approach is going forward will determine how successful he will be.

On the heels of handing New Orleans its lowest reported number of murders in 47 years, former police Chief Michael Harrison has taken his experience and talents to Baltimore.  In addition to orchestrating the reduction in murders, Harrison was able to develop citizen support, hone his  experience and  foster  a good working relationship with Justice Department staffers who oversee the city’s consent decree.  Regardless of all the accolades and successes achieved by Harrison, The Bowl needs more from its police department.

The narrative that the city needs to hire more officers is not only inaccurate, but more correctly couched in the city’s need for more funding from the state.  (Read Here)  Arguably, the city needs about 1,100 officers on any given day in The Bowl.  During Mardi Gras, when The Bowl explodes with a million people actually inhabiting the city, 2,000 officers are a necessity.  Remarkably, the state of Louisiana reaps a whopping 90 percent of all tax dollars from those tourists’ hotel taxes, but the city is responsible for paying NOPD officers.  (The state foots the bill on state police details during the festivities.) This is just one way the state exploits our city.  (Read here for yet other ways the state exploits NOLA.)

Nevertheless, the biggest problem, no matter how many officers the NOPD employs, is force utilization.  NOPD has a 3-to-1 manager cop-to-officer cop ratio.  Too many officers sit behind desks instead of patrolling the streets. This cultural laziness is the Achilles’ heel of the NOPD.  The new chief must reverse this.  More officers need to hit the streets.

Hopefully, the new chief will recognize that arresting people for trivial crimes has been a major factor in Louisiana’s rank as the mass incarceration leader of the world.  And studies abound showing that incarcerating people for minor offenses causes more crime.  New Orleanians need protection from violent criminals and those who perpetrate property crime.  Clearly, arresting people who perpetrate bad behavior is good policy.  But providing  great schools and economic opportunity discourages people from getting involved in criminal activity in the first place.

Good luck to Chief Harrison.  His experience with consent decrees and familiarity with violent neighborhoods will probably serve him well in Baltimore.  But our new chief, Shaun Ferguson, faces challenges in The Bowl.  A community policing approach might benefit our citizens better than the aggressive, oppressive high-arrest, top-heavy department of the past.