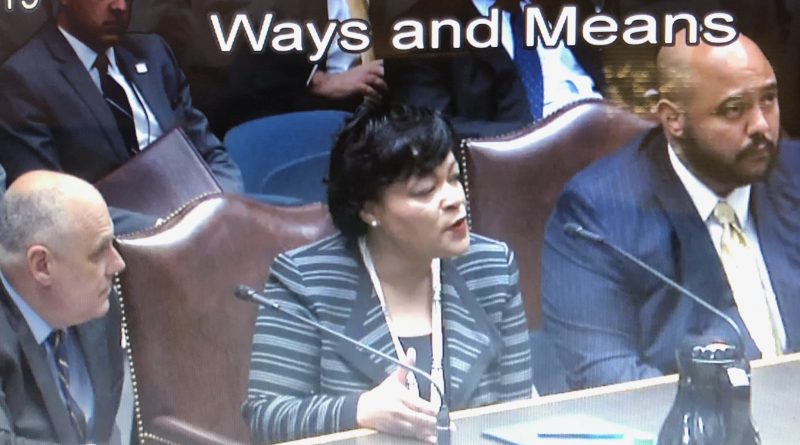 Mayor LaToya Cantrell is continuing her fight to redistribute the wealth held by state-empowered and New Orleans based tourism and sports entities, whose taxes seem to benefit the state of Louisiana more than the city of New Orleans.  These entities keep more than their fair share of New Orleans’ tourism generated tax dollars.

According to the Louisiana Office of Culture, Recreation and Tourism, $1.8 billion total state and local tax revenue is generated by travel and tourism activities. The University of New Orleans estimated that 10.98 million people visited New Orleans in 2017 and spent $7.51 billion.  The UNO’s numbers differ from D.K. Shiffler & Associates, a data firm, which reported 17.7 million visitors which spent $8.7 billion. Whichever estimate is most accurate, clearly Mayor Cantrell thinks the city is not getting a fair share of tourism tax dollars.

Mayor Cantrell’s Chief of Staff John Daniel Pourciau last week spent two days before the Louisiana Legislature’s Ways & Means Committee explaining why the mayor is seeking a fair share of the tourism tax dollars generated in the city of New Orleans. “It’s about allowing the city of New Orleans to take care of itself. New Orleans is tired of having to ask the state for help.”

Several house bills containing Mayor Cantrell’s requests will be voted on by the state House of Representatives next week:

HB 521 authorizes the city of New Orleans, subject to voter approval, to levy and collect an additional hotel occupancy tax that would be deposited into the parish’s infrastructure fund. This would not be a tax on residents but on hotel rooms, the cost of which will be passed onto hotel visitors.

HB522: Restores the “lost penny;” the 1% sales tax the city gave up to fund construction of the Louisiana Superdome.

HB573: Requires the Morial Convention Center to consolidate laws pertaining to the state entity in one place and for the Convention Center to follow the law that stipulates that excess money reserves be given the city. There is also an amendment to HB573 that calls for the establishment of a Disadvantage Business Enterprise program.

But several New Orleanians testified in favor of the bills. Ann Milling testified in support of the Mayor’s request. “We are fed up with boil water advisories, street flooding, flat tires and broken axles, and fed up that resources to address our pressing infrastructure needs are going elsewhere. Fourteen percent or $151 million goers to tourism and sports entities, while only three percent is going to our streets. This is indeed the tail wagging the dog.” Millings called for an end to the state’s outdated, lopsided, tax structure; regarding New Orleans-based state authorities.

Civil Engineer Iam Christian Tucker, a small business owner also testified.  “New Orleans is the revenue driver of this state. It is the state’s flagship city. Our current situation is not sustainable. You can’t keep kicking the can down to road. What will it take for the state to finally tend to the most critical aspect of what sustains us?”

The atmosphere of the first day of hearings, conducted by Ways and Means Committee Chairman Representative Neil C. Abramson, was amicable and cordial, with proponents and opponent politely stating their positions.

But on the second day, sensing they were losing the fight to keep all the revenue generated by their entities, opponents lowered the boom on Mayor Cantrell.

“This is a very earnest attempt to take down and destroy the largest economic development corporation in Louisiana,” said Stephen Perry, the CEO of New Orleans and Company. “New Orleans and Company is the official sales and marketing company for the state. We represent the Superdome and the Convention Center.”

Perry, a perennial government operative, served as Chief of Staff for the late Governor Murphy J. Foster, Jr. While working for Foster, Perry was instrumental in putting financing together for Phase III and planning for Phase IV for the Ernest N. Morial Convention Center.

Perry threatened that hotel taxes garnered during the Bayou Classic and the Essence Festival “will go away,” and that the state will have to “figure out how to pay for a lot,” if the bills pass. Perry was referring to the voluntary, self-assessed 1.75% hotel occupancy tax member hotels pay, of which .25% goes to the city. Perry implied that the voluntary tax would go away if the bills pass.

As soon as she took her seat at the hearing table, Mayor LaToya Cantrell told Perry, “You cut me deep…Shrek.  You cut me real deep.” After the laughter subsided over the mayor’s quote from Eddie Murphy’s character, Donkey, in the animated movie Shrek, Cantrell said, “Sewage, water, drainage, street repairs, and other infrastructure needs’ are her administration’s top priorities. Cantrell took time to attend the hearing, although she was supposed to be at the U.S. Conference of Mayors, co-chairing its Infrastructure Committee.

“I do see a light at the end of the tunnel. The New Orleans Tourism & Marketing budget, the New Orleans and Company budget, and the Convention Center have reserve funds. There are dollars there. We looked at our drinking water and got dinged by the state. We found out the same water that is cooling our turbines is the same water that comes out when we turn on our faucets. I’m advocating for dollars that will go into a dedicated infrastructure fund.”

Her administration is not sitting on its hands, though. “The city’s is spending $145 million in green infrastructure projects. And we have doubled sanitation fees. Our residents are doing their part but 400,000 can’t take care of (the needs of) 18 million visitors,” Cantrell explained.

The mayor also took issue with the fact that voters authorized dedicated taxes for the Convention Center, but the Center’s revenue is being used for other projects, thus denying voters input on how those tax dollars are used.

“When the legislation was passed it was for debt service, maintenance, and operations, with any surplus going to the city of New Orleans. And we haven’t seen that at all,” Cantrell said of the surpluses. The Convention Center has been around for 41 years. Currently, there is a $140 million surplus at the Convention Center.

However, Melvin J. Rodrigue, President of MCCNO, told legislators, “We don’t see it as excess.” He said the Center is still spending money and “We need to borrow another $400 million to make our plans happen. We can’t do that with your bills.”

Win, lose, or draw with the current legislation, Cantrell’s battle for a fair share of tourism dollars has exposed a greater problem.

Back in the day, an Iraqi War protester’s sign raised a pivotal question that is applicable to New Orleans’ fair share dilemma.  “How did our oil get under Iraq’s sand?” is akin to “How did all these state entities get on New Orleans’ land, when the city and its voters see very few benefits from them nor exercise any control over how those tax dollars are spent?”

Here are a few of the state-owned businesses that rake in the dollars in New Orleans, while residents share a disproportionate of the tax burden for essential services; streets, sewerage & water, police protection, fire protection, etc., that allows them to continue to function:

Clearly, as New Orleans goes, so does the state of Louisiana. Legislators should be wary of killing the goose that laid the golden egg. Everyone in power should protect the jewel of the South. They must be fair and do their share to keep the dollars flowing in a way that all can benefit; especially New Orleans residents.

5 thoughts on “Mayor Cantrell: “You Cut Me Deep…””