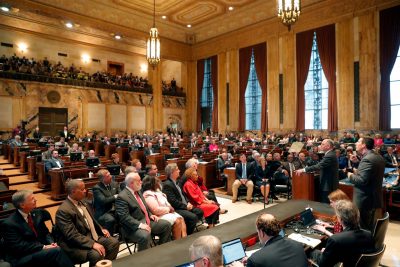 There’s this bill, supposedly the most important bill being debated this legislative session. This most important bill is designed to stop an age old come-up, one people here in Louisiana have used for generations to get their hands on some cash. The bill is called the Omnibus Premium Reduction Act of 2019, aka HB 372. The come-up it’s designed to stop is called getting in a wreck and suing the other person’s insurance company for inflated medical bills.

Involved in this are these lawyers who advertise on TV. You’ve seen them. They’re the ones  who advise you to call them if you’re injured in an accident. Sometimes their ads are very creative. They promise you that if you give them a call, you’ll get a check. As proof, they show other people who’ve supposedly given them a call and gotten checks to get on TV and testify on the lawyer’s behalf. These personal injury attorneys specialize in negotiating settlements based on medical bills, or as insurance companies probably claim – they specialize in getting their clients to fake or exaggerate injuries. Personal injury attorneys probably won’t like this most important bill being debated this legislative session.

According to the author of bill, Louisiana is a sue happy state, and when insurance companies pay out inflated settlements, they usually pass the costs on to their customers, which results in Louisiana having some of the highest car insurance rates in the country. One way the bill attempts to stop these inflated settlements is to make insurance companies less liable for a person’s medical bills. If you’re injured in an accident and your health insurance or Medicare pays for your treatment, then according to HB 372 the other person’s insurance company won’t be liable for the total amount the hospital bills like they are now. Instead, they’ll only be responsible for the amount your insurance company actually pays, which translates to the settlement being based on the treatment received rather than an inflated estimate of injuries.

Besides limiting the amount of a claim, the bill also tries to change how quick a personal injury attorney can get a check to you. Right now, an insurance company has a year to settle and pay claims. HB 372 would extend that to two years. It would also make cases more likely to be judged by juries instead of a judge. Under current law, a case has to exceed $50,000 to be eligible for a jury trial. HB 372 would drop that down to $5000. In theory, a trial by jury would take longer than simply going before a judge. It would also be more expensive, since you’d be paying your lawyer to present a prolonged case.

Interestingly, the bill ignores other factors that cause our state to have high insurance rates.  For example, insurance companies often charge people with bad credit more for coverage. Call it the indirect correlation effect, where a person’s premium rises as their credit score lowers. Apparently, if there’s one thing Louisiana has a plethora of besides sportsmen, it’s people with bad credit. It also has a plethora of bad roads, like really bad roads, roads that make you consider storing a front end in your trunk along with a jack and spare tire.

Representative Kirk Talbot(R), the author of the bill says he’s trying to make Louisiana a less litigious state. The savings from this move would theoretically be passed onto the customer. To ensure this, the bill calls for insurance companies to submit rate filings to the Dept. of Insurance for the first three years after the bill has passed. The Dept would then determine if rates need to be lowered or not.

This is all similar to the same tort reform Republicans argue for when it comes to health insurance. The problem they say isn’t the insurance companies but predatory lawyers forcing the companies into settlements that result in higher rates. If the lawsuits decrease, they say savings will eventually trickle down to customers. We shall see. HB 372 has passed the House last week and is now waiting to be heard in the Senate.

Bob Dylan once said, “Don’t follow leaders / watch your parking meters.” If this bill passes, you may want to consider judging your legislators based on how this affects your insurance rates.