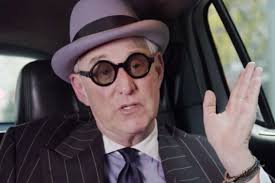 Info Pimping, And How It Might Show That Mueller Still Doesn’t Have Much On Trump

Pimps don’t get good press. From a public relations standpoint, that’s Rule #1. If you’re an aspiring pimp, be forewarned:  You’re either going to be depicted as an abuser or a sex trafficker forcing women into prostitution. In essence, though, provided all parties are willing, what you are is a middle man. That is, the link between a man who will pay and the woman who will have sex with him. Or, in the case of our president, the link between him and the women he’ll allegedly pay to piss on a mattress (but that’s another story). Today, though, let’s talk about a different type of pimp. One who has nothing to do with women or mattresses. This pimp’s name is Roger Stone, and what he pimps is information.

If you hadn’t heard of Roger Stone before Friday, you’ve probably heard of him now. Early Friday morning before the sun came up, the FBI showed up at Stone’s house armed with guns, CNN reporters and tactical gear. A full display of force and over-kill. You would’ve thought they were arresting Scarface, not a man charged with lying to Congress and obstruction of justice.

Regardless, though, if you’ve been dying to see Trump impeached and voted out of office, it was a moment to stand up and clap. Stone is now the seventh person connected to Trump’s campaign who’s been arrested for lying about something related to Russia. But in the scope of Mueller’s ultimate aim – to investigate any collusion or conspiracy between the Trump campaign and Russia – Stone’s indictment seems to vindicate Trump more than it establishes any connection between his campaign and Russia.

Quick recap: According to Stone’s indictment, in 2016, in the midst of the election, Russian military officers posed as a Romanian hacker called Guccifer and allegedly hacked into the Democratic National Committee’s – and Hillary Clinton’s – email accounts. They initially tried to put the emails out themselves, but found a bigger platform via WikiLeaks. At the time, the Trump campaign was out looking for dirt to use against Hillary Clinton. Apparently, in Republican circles, Roger Stone is somebody you go to for stuff like that. Stone, who had previously worked on the campaign, had two ins with WikiLeaks and was trying to get in good again by promising to get  the Trump campaign the info WikiLeaks held. Stone essentially positioned himself as the middleman between WikiLeaks and the campaign. A series of back-and-forths took place with Stone and members of the campaign. Steve Bannon, the Trump campaign’s CEO, was one of them.

Eventually, the campaign coordinated its messaging with WikiLeaks and released the emails. None of this is illegal, but after the election Stone was called to testify before a House committee. He was specifically asked if he had had any emails, texts or documents regarding the hacked emails. He said he didn’t. His computer and phone, now in FBI custody, say otherwise. These details – and trying to coerce another person into lying –  are why he’s in jail now.

But given all of this, here’s a question: If the Trump campaign was colluding or conspiring with Russians, why would it need Stone to get information from WikiLeaks? Couldn’t it deal directly with the Russians? The charges seem backward. If the campaign and the Russians were in cahoots, the Trump campaign would’ve been the ones pimping information to WikiLeaks, via Stone and his two-ins; not the other way around.

If you study enough philosophy, eventually you’ll run up on the problem of Infinite Regress. One version of it is the Cosmological argument, where to prove the existence of God one person will argue that since something can’t come from nothing, the universe must have a creator and that creator is God. But the conclusion is contradictory. Either the person will have to admit that something can come from nothing or that God also has a creator, and that creator also has a creator, and so on. Eventually, you wind up with an infinite regress of creators – or as the saying goes: creators all the way down.

Special Counselor Robert Mueller has been trying to find a link to prove collusion or conspiracy between the Trump campaign and Russia for a while, now. But if he were to construct a flow chart so far, it’d look something like this:

Clinton/DNC Emails —> Russia —> WikiLeaks —> Stone’s first in —> Stone’s second in —> Stone —> Trump campaign. In the old saying, pimps are usually up, but in the cosmology of this investigation, the main link between the Trump campaign, Russia and the hacked emails isn’t collusion, but a regress of pimps all the way down.