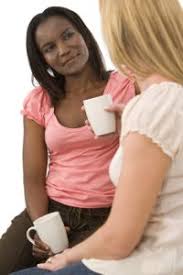 Backhanded compliments like, “You have such a beautiful face! If you lost some weight you’d be so pretty,” leave you in a tough position: Do you acknowledge that you’re insulted? Or do you just pretend you’re flattered?

Clearly, some backhanded compliments are mean-spirited, while others are said out of ignorance. Sometimes it’s helpful to consider the person’s intentions before choosing what to say in response.

Here are five helpful ways to respond to a backhanded compliment:

Staying silent doesn’t mean you’re letting yourself be pushed around. In fact, saying nothing at all can be one of the best ways to avoid giving away your power. It sends a message that says, “I don’t value your opinion enough to justify it with a response.” Silence also avoids arguments.

When to use it: It’s a good tactic to use when you know someone is trying to get your attention. If your child says, “Thanks for taking me to the park today. It’s about time you took me to do something fun,” don’t take the bait.

There’s no need to justify your choices when someone insults you, especially if your response isn’t likely to help the situation. Instead of getting into a debate about why the comment is hurtful, respond with a simple thank you. This is sometimes the best way to move forward.

When to use it: This approach is especially appropriate when people give a backhanded compliment out of ignorance. When Grandma says, “I’m glad you got a job in real estate. That computer stuff you were doing from home wasn’t a real job,” a simple, “thank you,” could be the best way to respond.

Feedback and criticism can be essential to improving your performance, but sugarcoating an insult with a compliment usually isn’t constructive. Acknowledge the positive portion of a backhanded compliment to show that passive-aggressive communication isn’t effective.

When to use it: When your boss says, “You were so productive today! It’s too bad you didn’t do this last week when I could have used your help even more,” simply respond by saying, “Thank you for noticing my hard work today.”

Backhanded compliments can damage relationships, so sometimes it’s best to address the issue in a direct manner. If you don’t do this, the snarky comments can continue and cause a relationship to deteriorate. If you don’t want a hurtful comment to get in the way of your relationship, speak up.

When to use it: If your friend says, “Those pants look great on you. They hide your belly nicely,” respond by speaking directly: “I’m glad you like these pants, but the comment about my stomach is hurtful.” If you are too stunned to speak when you receive a backhanded compliment, you can address the issue at a later time.

5. Keep your sense of humor.

Sometimes the best thing you can do is not take yourself—or someone’s backhanded compliment—too seriously. The person who gives it may not know how to deal with their emotions, or they might be trying to intentionally hurt you. Respond with a little humor and avoid getting snide.

When to use it: A co-worker who says, “Congratulations on that promotion. Perhaps now you won’t be so irritable all of the time,” is probably envious of your success. A good response might be, “Yikes! Sounds like you’ll be happy to see me go.”