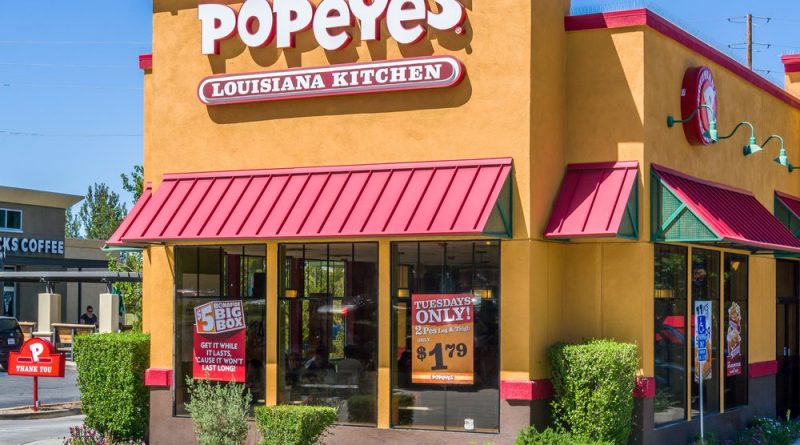 Popeyes knows a thing or two about chicken … but how much do you really know about it?

Its spice mix saved the chain

Originally, Popeyes founder Al Copeland opened a restaurant called Chicken on the Run in 1972 with a focus on traditional Southern fried chicken. Business wasn’t taking off, so he shut the restaurant’s doors and re-opened with a new name (Popeyes) and a new spicy, Cajun-style recipe. Giving his chicken a kick was a success, and Popeyes turned into a franchise within four years. Check out these other 15 restaurants you didn’t know had a name change.

The chain bought the chicken’s spice recipe for $43 million

For 23 years, Popeyes didn’t actually own the recipe to its famous mix of spices—or other recipes. To make sense of all that, rewind back to 1984 when Popeyes founder Al Copeland opened food manufacturing company Diversified Food and Seasonings, which provided ingredients for his chicken chain but was its own separate company. In 1991, Copeland filed for bankruptcy and lost ownership over Popeyes (save for a few franchises). With Copeland no longer an owner, Popeyes had to pay $3.1 million in licensing fees every year to use the manufacturer’s recipes until 2014, when it paid $43 million to buy back the recipes.

In October 2018, Popeyes opened its 3,000th location. To celebrate the huge milestone, a few franchises offered quite the special: boneless wings coated in champagne, then tossed in 24-karat gold flakes. It is the gold standard for fried chicken, after all. Find out which 13 fast-food items employees say you should never order.

Beyoncé has a lifetime supply

In what just might be the ultimate celebrity perk, Beyoncé was honored with a lifetime supply of Popeyes. “At one point … everywhere I went, people would buy me Popeyes, like the fans, and Popeyes heard, so they gave me a lifetime membership,” the singer told Oprah in 2003. Whenever she pulls out that card, she’s entitled to as much chicken as she wants, though she admitted that she’d been too embarrassed to ever actually use it.

The chicken tenders are the healthiest option

Piece for piece, Popeyes chicken tenders are the lowest in calories and fat of all the fried chicken options. Each chicken tender has about 148 calories (though a three- or five- piece meal would of course have more), compared to 160 calories in a Bonafide leg or 210 in a wing. Surprisingly, the Bonafide breast is the highest in calories, clocking in at 380. You could always go healthy with the non-breaded Blackened Chicken, but then again, when in Popeyes …

There have been some pretty creative takes on it

Past offerings that have come and gone—and sometimes returned again—have included Chicken Waffle Tenders (chicken dipped in waffle batter and deep-fried), Wicked Chicken (thin, curly chicken tenders), and Beer Can Chicken (fried chicken that got its taste from a spice blend, not actual beer). When you’re craving chicken, you’ll want to know the secret that makes KFC’s chicken so crispy.

Lafayette, Louisiana, residents are lucky: They live near the last remaining Popeyes buffet in the country. Not only can customers sink their teeth into endless fried chicken, but they can pile their plates high with biscuits, mashed potatoes, and other favorites. Anyone else drooling?

Anthony Bourdain was a fan

That’s right—one of the world’s biggest foodies had a soft spot for good ol’ Popeyes chicken. The late Anthony Bourdain admitted in a May 2018 People interview that when staying in Lafayette, Louisiana (yes, the town with the buffet), he’d eaten at Popeyes three days in a row. He chowed down on fried chicken, but also the guilty pleasure that he admitted to Thrillist: Popeyes mac and cheese.

It has a whole month dedicated to it

September is National Fried Chicken month, but in 2013, Popeyes launched its own spin on the celebration. Every September since then, the chain has promoted Love That Chicken month based on its old jingle, with deals to draw in customers. When it comes to competitors, this is why KFC changed its name from Kentucky Fried Chicken.

Its non-breaded chicken was announced via flash mob

When Popeyes announced its “Lousiana Leaux Naked Chicken” in 2011, there was dancing in the street—specifically, a flash mob on New Orleans’ Bourbon Street. The offering is now known as Blackened Chicken. Make sure you know these other 33 secrets fast food workers aren’t telling you.