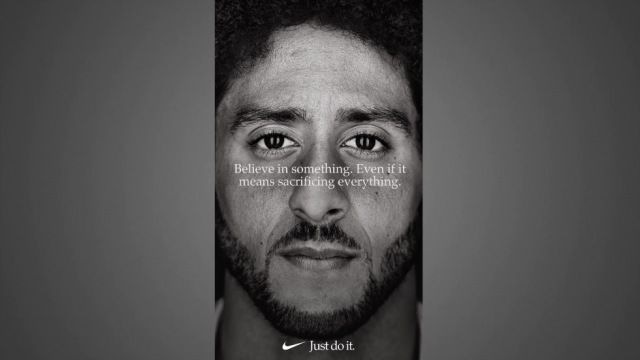 With every innocent life stolen by an errant cop, with every black life that is snuffed out by a white racist law enforcement officer, sworn to protect and serve, comes a vision of football star Colin Kaepernick, kneeling in anguish, head bowed, with the American anthem played in the background, in silent, reverent, protest against a law enforcement system whose negligible epidemic of domestic violence continues to spread into an endless loop of déjà vu for Blacks. Whether they are gunned down in the streets, their own homes and backyards, parks, cars or walking, Kaepernick’s protest comes roaring to mind, as do his prophetic 2016 words.

“I am not going to stand up to show pride in a flag for a country that oppresses black people and people of color,” Kaepernick told NFL Media in an exclusive interview after a 2016 game. “To me, this is bigger than football and it would be selfish on my part to look the other way. There are bodies in the street and people getting paid leave and getting away with murder.”

The murder of the 26-year-old Mario Woods on December 2, 2015 by five San Francisco police officers left Kaepernick with feelings of loss, pain and anger. The “execution” of Woods inspired Kaepernick to do something.

“There’s a lot of things that need to change. One specifically? Police brutality. There’re people being murdered unjustly, and no one is being held accountable. People are being given paid leave for killing people. That’s not right,” he explained.

Fast forward to August 7, 2019, and Kaepernick tweeted:  889 days Denied Work. 5am. 5 days a week. For 3 years. Still Ready. But in September 2019, Kaepernick’s Nike’s commercial featuring the former San Francisco 49ers quarterback, won a 2019 Creative Arts Emmy Award.  “Believe in something, even if it means sacrificing everything,” Kaepernick said in the commercial. The athlete indeed has sacrificed a multi-million-dollar career for the greater good, but his name will go down in history among others who stood for justice. He is also in the third year of his “Know Your Rights Camp,” a touring program that teaches youth their rights and responsibilities.

The stats of police murdering black people are staggering, shocking, infuriating and emblematic of a widespread epidemic of emergency proportions in the black community: Police killed 1,164 people in 2018, the majority were black. Black people are 3x more likely to be killed by police than white people. And the publishers of Mapping Police Violence agreed with Kaepernick. “There is no accountability. 99% of cases in 2015 have not resulted in any officer(s) involved being convicted of a crime.” (Source: Mapping Police Violence) Mapping Police Violence posted the names, photos,  and circumstances that lead to police killing unarmed black people in 2014 and 2015. https://mappingpoliceviolence.org/unarmed2014

In August 2019, the NewsOne staff listed the names and photos of 64 black men and boys who were killed (executed) by the police. The editors described the killing of black men and boys as a centuries-old American tradition among law enforcement in the U.S. “But the fact that this apparent rite of police passage was still thriving in 2019 and expected to continue well into 2020 and beyond should give any American citizen pause as more and more names of Black males continue to be added to a growing list of victims with what seems like a new shooting every week.” https://newsone.com/playlist/black-men-youths-who-were-killed-by-police/

The hue and cry for more protests and policing reform is resounding loudly across America, while Jefferson’s killer walks free, awaiting trial. The fact that Jefferson was shot through her bedroom window in her home, as she tried to look outside at what she must have thought was a prowler, and that her eight-year-old nephew was in the room at the time, is as galling and infuriating as the fact that cops who murder Black people are allowed to be free and out on bond. Guyger was free for an entire year before going to trial.

Racist cops must be stopped before they can kill again. Just ten days after murderer Amber Guyger killed Botham Shem Jean in his own apartment, here we are again. Guyger’s flimsy excuse that she thought he was in her apartment is ludicrous at best and the height of incompetence at the very worst.

Atatiana Koquice Jefferson, a pre-med Xavier University graduate, who sold medical equipment and wanted to become a doctor, is now dead.  Dean’s excuse for shooting Jefferson was that he felt threatened. This is the same person that didn’t identify himself, was prowling around this woman’s property in the wee hours of the morning and shot her through a window; one second after he ordered her to put her hands up.

University President Reynold Verret said, “We are deeply dismayed by the news of another African American killed in her home by the police, in Fort Worth, Texas. This time, she is one of our Xavier University of Louisiana alumnae.” Verret said people should “expect safety” when they call police.

Black people know, instinctively, that just being around police can end in a death sentence. And some whites know, empathize, and are as shocked as others over police executions of blacks.

Savanna Hartman, a white resident of Tampa, Florida, was visibly sad about Jefferson’s murder, as she waxed poetic: “I wasn’t born rich but don’t get it twisted. See how I look? My white skin is my privilege. I don’t get watched when I go to the mall. When I get stopped for a ticket, it doesn’t end in a brawl. I don’t know what it’s like to go out for snacks and end up lying dead on my back. My car has never been watched or followed around, my kids don’t play in parks and then get gunned down,” she said referencing the shooting deaths of Trayvon Martin and Tamir Rice.

New Orleans has had its share of police executions of black people without cause: Justin Sipp, Henry Glover, the four people murdered on the Danzinger Bridge, Wendell Allen, the Algiers 7 cops who killed four people, including a pregnant woman, and numerous others dating back to the founding of the Louisiana territory.  But we do have a Consent Decree and active Police Monitor who investigates cases of police misconduct, thanks to local activists who demanded consequences for killer cops.

Obviously, the Fort Worth Police Department needs a Consent Decree to reform its rogue PD. S. Lee Merritt, the Jefferson’s family attorney said at an October 14, press conference, “The Fort Worth Police Department is on pace to be one of the deadliest police departments in the United States.”  There have been at least seven shootings involving Fort Worth officers since June 2019 and nine since the beginning of the year. Six of those shot died, including Jefferson.

Jefferson’s family is calling for a federal investigation or an independent investigation. Given that the Trump’s Administration’s Department of Justice recently exonerated the officer who choked Eric Gardner of New York to death, the relatives’ plea may fall on deaf ears. Bad actors such as these underscore the importance of voting. Blacks will never get justice so long as racists are charged with adjudicating justice.

As Jefferson’s death reverberated across the nation, calls for real police reform came from presidential candidates Julian Castro, Kamala Harris, and others. “How many articles do we need to read, or videos do we need to watch before we do something to reform policing in this country?” Castro asked. “Police are supposed to make us safer in our community, not make us unsafe in our own homes,” said Senator Kamala Harris.

Marq Claxton, a former NYPD detective and director of the Black Law Enforcement Alliance explained the reasons for the continuous murders of blacks by police during a recent interview on MSNBC. “It keeps happening because we fail to really learn the lessons from history and I think what you’re  seeing now and witnessing now, in the expressions of anger and frustration by the community and across the nation, is because it’s not about just these individual two cases, it’s about the history, the pattern of cases that happened over the last several decades, involving failed shootings by police officers of primarily young black men.”

What can be done to achieve real police reform? “You have to change the part of the police culture itself. We cannot, no matter what we do, avoid the conversation about the role that race has played historically in policing and take affirmative action in improving it and penalizing those who operate outside of the standards,” Claxton suggested.

Federal officials and state legislatures should follow California Governor Gavin Newsome’s lead in stopping police executions of black people. Stephon Clark, a 22-year-old black man, was gunned down in his grandmother’s backyard in 2018. The cops thought he had a gun, but Clark was holding a cell phone. Gov. Newsom signed AB 392, believed to be one of the toughest laws in the country regulating when police can use deadly force, on Monday, Aug. 19, 2019.

One month later, the Sacramento Police cleared Officers Terrence Mercadal and Jared Robinet, saying they did not violate department policy or training. The announcement came three minutes after U.S. Attorney McGregor Scott and the FBI announced their own investigation, saying it “found insufficient evidence to support federal criminal civil rights charges against the Sacramento Police Department officers involved. The officers involved in this case will be returned to full, active duty,” according to a Sacramento Bee article.

So, the fox watching the hen house investigations must end, too, if real reform is to take place. Police can’t police themselves. The blue line is too thick, the fraternal order too fraught with protectionism, and racism is too rampant among a lot of badge-wearing white cops at local, state, and federal levels.

Anti-bias training, psychological screening for implicit bias and treatment, stiffer prison sentences, immediate independent investigations, lie-detector tests, and consent decrees must be a part of any comprehensive policing reform strategy. Changing hearts and minds and reversing centuries of racism based on skin color will take extraordinary political pressure, stiffer laws, and immediate accountability. But it’s not impossible. No one is above the law, including cops.