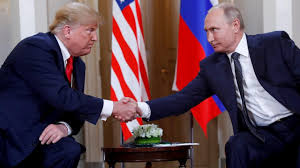 Why Won’t The President Admit The Obvious With Russia?

So lets say you’re sitting around thinking of all the ways the president should die. A hangman and noose may seem pretty archaic, a firing squad pretty inhumane, and lethal injection…well, it’s had its issues recently. Still, you consider the man treasonous, and according to the U.S. Constitution, death or jail are the only options -either his head or his freedom. Maybe you’re not comfortable with the government killing people regardless of the crime, so you opt for jail time. Considering the offense, what would be an appropriate sentence? Five (5) years is the minimum sentence, but how much more beyond that?

Let’s be clear, though, President Trump did not commit treason in Helsinki as some say. Yeah, he made an ass out of himself as usual, but treason, that would be a nah, nope, no, nah. For the non-hyperbolically inclined, treason, according to the U.S. Constitution, consists of aiding an enemy in a time of war or staging some type of uprising or coup. As far as we know, there are no rifles, grenade launchers, or tactical plans being handed out to people wearing MAGA hats, and neither Congress nor the President has declared war with Russia. So, what does that leave us with? What do we make of what went down between Trump and Putin? And why can’t he admit that Russians meddled in the last presidential election?

Theory #1: (these are not in order): Trump doesn’t want to admit Russia meddled because he believes it’ll taint his election.

Let’s say you just won an election that most in the media said you wouldn’t win, and afterwards, instead of congratulating you on your surprise victory, the majority of that media speculate on the different ways you might have stolen the election or how outdated the electoral process is. You just might be a little bit defensive when it comes to any talk of you not being legitimately elected. If you’re somebody as egotistical as Donald Trump, you just might let that defensiveness trump all evidence and common sense. So, he might have met with Putin and said he believed his denials because it confirmed what he already wanted to believe, that Russia didn’t interfere on his behalf, and that he beat Hillary Clinton fair and square.

Theory #2: Trump is full of shit!  He knows Russia meddled. He was briefed on the meddling right after he took office. He was also warned that the Russians had probably compromised his National Security Adviser.  Also, Trump knew of a meeting between his son, his campaign manager, and a Russian lobbyist who was offering dirt on Clinton. Still, he personally didn’t collude or authorize any colluding, so he’s denying that any took place to protect people around him who colluded on his behalf. This might make him a patsy or a potential Manchurian candidate, but also innocent of orchestrating any crookedness to get elected.

Theory #3: Trump is really full of shit! He knows Russia meddled, was briefed on it, and had a hand in orchestrating it. Supposedly, Trump has been getting loans and doing business with Russians for years, so during his campaign he turned to them (his allies) to help dig up dirt on Clinton. That included hacking into emails, creating websites and Facebook profiles to spread true and fake news, and possibly failed attempts to tamper with some voting machines. He won’t admit to any of this because 1) some of it could be illegal, 2) some of it is immoral, and 3) the Russian government supposedly has all sorts of compromising information on him.

Out of the three, what would be worse, that the president is possibly compromising the next election because he’s too egotistical to admit the obvious, that president is putting the plight of his family and friends before what’s best for the country, or that the president is somebody who’d stoop to colluding with a foreign government to win an election? Can’t decide? Don’t worry. Neither can I.