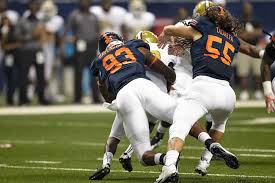 Saints Are Betting Rookie is the Missing Piece

Hearing that the Saints had just traded up 13 slots in the 1st round of the NFL draft was exciting.  After grand slamming last season’s draft and getting four immediate starters, the team’s aggressiveness was electrifying. Watching the leaguewide rush on quarterbacks, Heisman Trophy winning quarterback Lamar Jackson had to be the pick. But when NFL Commissioner Roger Goodell said, “the New Orleans Saints select Marcus Davenport,” all I could muster was “WHO DAT”?  Kind of a head scratcher.  Who the heck is the guy?  And why did the Saints trade so much to get him?

The Saints are a solid team without many needs.  If there is concern, the defense is still the question mark.  Had the team been able to pressure the quarterback on the last play against Minnesota, maybe the great whiff would not have happened.  And in the NFL the only thing better than having a great quarterback is having somebody to apply great pressure on the quarterback.  So that the team targeted a pass rusher is understandable.  And Davenport was an elite pass rusher for a small school.

Also finding quarterbacks via free agency is remarkably easier than finding elite pass rushers.  Think Drew Brees or Kirk Cousins or Sam Bradford or Peyton Manning and on and on.  But rarely do teams allow dominant pass rushers to leave via free agency.  So, passing on Lamar Jackson is also fathomable.

The Texas at San Antonio prospect is big, strong and freakishly athletic.  Weekly he dominated the opponents he faced.  Yet therein lies the question.  Conference USA is not the SEC.  And while Davenport showed dominance against small school talent, will he be able to dominate in the NFL.  Because as the 14th player taken in the draft, Davenport is expected to significantly impact the team, much like last year’s first pick Marshon Lattimore.  Davenport’s strong showing at the Senior Bowl convinced the team beyond reasonable doubt and the team paid a hero’s ransom to move into position to draft the talented defensive end.

Remarkably, the Saints have a history of finding diamonds amongst the small school rubble of the college football landscape.  Current starting left tackle, Terron Armstead, is the most obvious example but over the years players like Jermon Bushrod and Jahri Evans are just a couple of the many examples of the scouting department’s ability to find talent, especially linemen, from small programs who develop into all pro talent.

But was the price too high?  The Saints traded places with Green Bay in the first round to select Davenport.  But to do so, the Saints gave up their 5th round pick this year and their 1st round pick next year.  The Saints are all in with this pick.  Superbowl or bust. They obviously believe that he will make the defense as strong as the offense.  And if the Saints’ defense turns out to be a sack machine, then Mickey Loomis and company will solidify the front office as one of the best in the NFL.  And if Davenport can produce QB pressure opposite Pro Bowler Cam Jordan, and the linebackers and secondary match last year’s productivity, then the Who Dat’s might be partying in Atlanta next year.