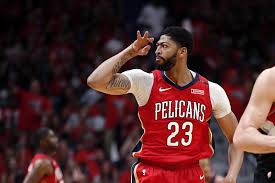 The Brow Gets His First Broom

Who would’ve thunk it? These Pelicans have spread their wings and are flapping to the 2nd round after sweeping the Portland TrailBlazers out of the playoffs. To paraphrase Rasheed Wallace: the stats don’t lie, and in this matchup, the Pelicans dominated Blazers in almost every category.

In short, this was a beatdown, so much so that after pretty much quitting during game 3, the Blazers were reduced to trying to pick fights to stay competitive in game 4. It worked for a while. At the half, the Trailblazers trailed by 2 instead of 19 like they did in game 3. No worries though. The Pelicans responded with a 42 point 3rd quarter that left the Blazers playing catch up the rest of the game.

Though Anthony Davis averaged 33 points, 12 rebounds, 3 blocks, and 2 steals per game, the MVP of the series is Jrue Holiday. Holiday averaged 27 points, 4 rebounds, and 6 assists, while defending Damian Lillard into submission from the opening tip of this series.

Lillard was the Blazers’ main man, an all-star, all-NBA team candidate, former rookie of the year, the Rip in so-called Rip City, and in typical franchise player fashion, he came into the series averaging 27 points, 4 rebounds, and 6 assists per game. After Holiday locked onto him though, Lillard left averaging 18 points, 5 assists, 4 rebounds, and 4 turnovers. He also had the worst field goal percentage (35%) of any player on the team, and the worst three-point percentage (30%). His 16 total turnovers more than doubled all his teammates except for one: C.J. McCollum, the Blazers’ 2nd best player, who had 9.

Now the Pelicans step up in class. Their reward for beating down the Blazers is a 7-game series with the defending champs, the Golden State Warriors. The Warriors have beaten the Pelicans 20 out of the last 22 times they’ve played, and the last time they met in the postseason, the Warriors swept the Pelicans out of the playoffs. That was three years ago though, and this year the Warriors haven’t really been on their game. Even before Stephen Curry got hurt, the Warriors weren’t playing championship basketball. Instead, they were plagued by turnovers and bad defense.

Still, pulling off an upset will be a lot tougher for the Pelicans even with Curry possibly missing the first few games. Unlike the Blazers, the Warriors won’t be out of their comfort zone playing at the Pelicans pace. And unlike the Blazers, the Warriors have multiple people who can take over a game – Curry, Kevin Durant, Klay Thompson, and all-around threat Draymond Green with his defense, scoring, and passing.  This is why they average 29 assists per game compared to the Blazers’ 19.

The Pelicans are confident, though, and hot right now, the hottest team in the league (9 games in a row), and they’ve been doing it with a TB (Tom Benson) etched into the left side of their Zatarain’s sponsored jerseys (nice touch). So, expect them to put up a fight, if not pull off an upset.

It’s been quite the turnaround. Last year, some considered Alvin Gentry to be a coach out of his league, Anthony Davis to be a finesse big man, and Jrue Holiday just another overpriced free agent the team waisted money on. Now the trio, along with Rajon “Playoff” Rondo, have the Pelicans regarded as a legitimate team, not just league-wide, but also in this football-crazed city. We just need to figure out one thing though: is there a basketball translation for who dat?