Our president also dabbles.  His superficial interest is further limited to 140 Twitter characters. He dabbles in exaggerated arguments and logical fallacies. And he’s particularly fond of slippery slopes, false equivocations, and straw men. When asked how he felt about a statue of General Robert E. Lee being torn down, our dabbling president asked, what about George Washington or Thomas Jefferson? They owned slaves. Are we going to tear them down too?

According to our president’s logic, Gen. Lee’s statues shouldn’t be torn down because Washington’s and Jefferson’s statues will soon follow- also known as the where will it stop argument or the classic slippery slope. 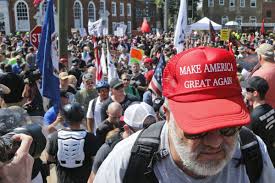 Slippery slopes are used to distort an issue by focusing on hypothetical consequences, usually extreme ones. In this case, rather than defend Gen. Lee’s character and explain why his statues should remain, our sadly dabbling president tried to shift the focus to an imagined chain reaction that would result if confederate monuments are torn down.   Another Trump fail.

The appropriate response to this type of argument is to ignore it. George Washington, Thomas Jefferson, or even slavery in general, isn’t the issue here; Gen. Lee and whether he and other confederates should be memorialized for fighting a traitorous war to preserve slavery is. Any other contemplation is diversionary and unconnected.

A straw man delusion is all about exaggerating a point someone makes, then trying to force them to defend that exaggeration. Our president loves the straw men tactic. Our president is particularly drawn to straw men because he loves to exaggerate. After Charlottesville, his preferred straw man has been history itself. According to our president, tearing down confederate monuments is rewriting history. In this case, a stance against confederate monuments becomes a stance about rewriting history, as if once the monuments disappear the actual historical events or people they memorialize will disappear too. Again, it’s another chance to distract and distort, taking the focus away from which part of history should be celebrated and shifting to whether revisionism is justifiable or not. 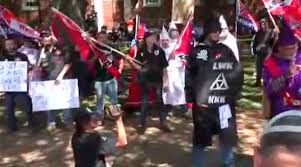 Our president believes he’s a great man and a great thinker. But it took our great president 2 days to decide that white supremacists, neo-Nazis, and confederate lovers should be condemned. Then, in an heretofore unseen example of  Trump greatness, it took our great president 24 hours  to recant and champion the cause of confederate lovers, while throwing shade at those who protested against neo-Nazis and white supremacists. He said there was “blame on both sides”. That would make our president a great false equivocator.

While true both sides did show up to fight during the march in Charlottesville, that doesn’t justify a general “there’s blame on both sides” equivocation, especially when one side shows up to express their hate for Jews and black people, and the other side shows up to fight bigotry. Pick your poison, either those there to stand up for the values we all claim to espouse, or the people promoting racism?

Our president would call that a false dichotomy. As he said, there were plenty of “good people” supporting the neo-Nazi, white supremacist rally in Charlottesville. That’s almost as absurd as Trump holding the title of president, given his 8 months track record. Hopefully, sooner than later, his presidency is torn down like the confederate statues around the country, and he is physically removed from office. Hopefully we can then rewrite 8 months of bad American history, reducing his presidency to a monument to the illogical arguments he put forth regarding our country.