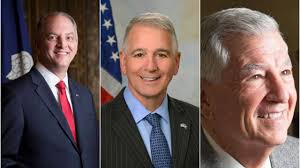 OK, So the Governor’s Race Is A Close One Now?

Astonishment has gripped the media. Reporters and editors are scrambling to figure it out. How could this be happening? John Bel Edwards, the oh so dominant governor, the man who held what was at one time an huge lead in the early polls, has seen that lead slip at an alarming rate. Too the surprise of political pundits, Edwards is no longer assured of the easy victory that the polls predicted at the beginning of summer.

Now, near summer’s end, Edwards has a much slimmer lead in the polls.

Fire up the presses. This is big news people. Think tanks can now be formed. Round tables can be assembled on the news and talk radio. Upcoming debates will be hyped. How will Governor Edwards respond to this shocking blow to his reelection chances?

As it stands now, the latest polls have Edwards winning in the general election receiving 52% of the vote in a three-way race. With more than a month before the election anything can happen. Is that a large enough margin to prevent a potential Joe Biden type gaffe from forcing him into a run-off?  In the head to head matchups, Edwards leads State Rep. Ralph Abraham 53% – 47%. Edwards also leads businessman Eddie Rispone 55% – 45%. But time is ticking for the Republicans to find a big enough chink in Edward’s armor. Stay tuned to your local news coverage for that one.

Edwards’ main challenger thus far is Abraham, a man who strangely made his television debut by treating potential viewers to a shot of his ankles. His coming out commercial begins with a shot of the aforementioned ankles before slowly climbing to his calves, then his thighs, then his midsection, and ultimately settling on a shot of him smiling weirdly in a military styled jacket and jeans. Policy-wise, Abraham has resorted to a platform of nitpicking and focusing on issues that seem trivial for a governor’s election. Yeah, it’s great that Edwards expanded Medicaid and granted at least 500,000 people health insurance, but oh let me tell you how poorly the program is being run. Not moved? How about these trial lawyers? When he’s governor, Abraham says he’ll put an end to their so-called predatory practices, and as a result lower our car insurance rates. Never mind that it would also lower people’s chances of suing insurance companies.  And yes teachers deserve raises, but let’s go about it the Jindal way and cut taxes, and while they’re waiting for the windfall to trickle down cue in another shot of his ankles.

Then there’s challenger number 2 – Eddie Rispone. If you ever want to curb any of the optimism you feel towards the overall mental capacity of our state just consider that apparently in a head to head with Edwards, 45% of the people polled said they would elect Rispone as governor. Have you seen his coming out commercial? He loves Trump. And…that’s about it. Just when you thought we were spared from John Kennedy’s gee awe shucks hokeyisms, in steps Rispone to cater to those who are motivated by that. There’s not a problem that he can’t fix with an outsider’s perspective. Even though, in a recent forum, he admitted that as an outsider he doesn’t have much knowledge of how government works. Remember, 45%. Some of those people could be your neighbors.

Edwards sits between the two of them, a bevy of political contradictions. He’s a radical liberal carrying on the legacy of Obamacare via Medicaid expansion. Yet he’s simultaneously a pro-life conservative who believes there should be no abortions once there’s a fetal heartbeat. He’s a tax and spend liberal, ready to take taxpayer money and use it for a pay raise for teachers. And he’s an anti-Black Lives Matter conservative, signing a bill that would grant the police protections as a special class.  More importantly, though, for the first time since Katrina, he’s a scandal free governor overseeing an up-ticking economy. And his contradictory political positions not only prevent him from being stereotyped, but it also gives him a sense of authenticity, like a man who won’t let politics determine his morals or choices.

Hopefully, Louisianans are smart enough to choose authenticity over nit-picking and political pandering. Contrary to the latest news coverage, the odds of that choice still seem obvious. But who knows, it’s Louisiana. Stranger things have happened. If so, wouldn’t it be a typical Louisiana politics news story?

5 thoughts on “The Louisiana Governor’s Race”