Want to know who your real friends are? Look for these essential things.

Friendship may feel complicated, but it turns out that recognizing your true friends can be surprisingly simple. There are some fundamental elements that every close bond—including those with family and romantic partners—shares. To call someone a friend, the relationship must be long-lasting, it must be positive, and it must involve cooperation.

That’s the three-legged stool that friendship rests on, say the evolutionary biologists I’ve been reporting on (link is external) recently. Similar personalities or a shared sense of humor matter, but are less essential than they seem. Remove a leg of the stool, though, and your “friend” may not be there when you need one. Being able to count on someone in a crisis, say the scientists, is the whole reason we have friends in the first place.

Getting Serious About Friendship

This stripped-down definition of friendship is the result of a shift in how scientists think about social behavior. For a long time—centuries even—serious scientists didn’t study friendship because they didn’t much respect it. It was too squishy, too ephemeral, too hard to define and measure (defining and measuring are essential to the scientific process).

But then primatologists—yes, the scientists who spend their time watching monkeys and apes—noticed that the animals they were observing seemed to have friends, too. A debate ensued about whether it was appropriate to use the word “friend” when talking about animals. In the end, the scientists decided to call it like they saw it, and what they saw was friendship.

How could they tell? Because in animals, the scientists could measure the interactions between individuals, over the lifetimes of generations of baboons and macaques and chimpanzees. From those years of observation, they developed—for the first time—the basic, standard definition (link is external) of a close social bond I’ve already cited. “Friendship is a long-term, positive relationship that involves cooperation,” says psychologist Robert Seyfarth (link is external) of the University of Pennsylvania, who with his wife, biologist Dorothy Cheney, spent decades watching baboons and vervet monkeys in Africa and has been a pioneer in the field.

Animals actively work to build these bonds, to make friends. They do it, the theory goes, to avoid being eaten by predators. Multiple studies, by Seyfarth (link is external) and others (link is external), have shown that the animals with the strongest social networks live longest and have better reproductive success. “What friendship is about at the end of the day,” says evolutionary anthropologist Robin Dunbar (link is external) of the University of Oxford, “is creating small-scale, intensely bonded groups that act as protection [to life’s] stresses.”

It’s not hard to see the logic in that for humans as well. Studies have shown (link is external) that people who are socially connected also live longer. Seen this way, the three essential ingredients of friendship make a lot of sense. 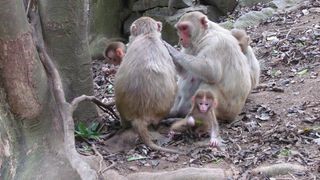 Monkeys spend a lot of the day grooming.

The more time we spend with our friends—talking, sharing a meal, going to a movie—the closer we usually are. Monkeys spend time by grooming each other—for as much as 20% of their waking hours. But they don’t groom with all members of the troop equally, they pick and choose, just as we do, building bonds over time. All of it, says Dunbar, is laying groundwork to help you cope with what lies ahead, whether that’s a lion or a lay-off. “If you need a shoulder to cry on,” says Dunbar, “you need to prepare that shoulder ahead of time.”

Grooming consists of picking dirt and bugs out of one another’s fur, but it also triggers endorphins and oxytocin, neurotransmitters, or chemical messengers, that make monkeys feel good and bond them more closely to each other. Human activities like laughing, singing, dancing and storytelling—those things we do with friends—trigger those same neurotransmitters. In other words, there’s biology behind the feeling that a real friend is someone you want to spend time with, who makes you feel good. By contrast, unpleasant interactions set off our stress responses.

All that investing of time and good feeling only pays off if, eventually, your friend is there to help when you need it and vice versa—to bring dinner over in a crisis, to help you move. The two of you must cooperate. When you don’t, when the relationship feels too lopsided, it often fades away, or should, because you need to invest in someone else.

On average, research shows that most of us have about five people (link is external) in our lives who meet these three criteria; people we count as our most intimate friends. Who are yours? And are you doing everything you should be to ensure that you will be able to count on each other when necessary?