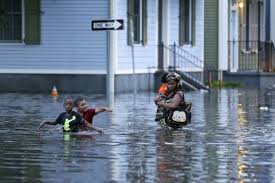 Water  and storm water drainage have been managed poorly, so poorly that I believe Sewerage and Water Board managers are attempting to destroy the agency so a company can take over New Orleans water and sewer services. The City Council sits on its hands, while Mayor Mitch Landrieu hatches a private takeover. A coalition of local groups, the Sewerage and Water Board Fight Back Coalition has stepped up to defend our citizens from abuse and exploitation.

In my 50 years working as a urban and regional planner I have seen many “administrative train wrecks”,  but never one so brutal as water, sewer and storm drainage here.

Fourteen or so meter readers serve the entire City. Water service bills are estimated. Water bills for about half the City have increased, some doubled and tripled.  Some are held hostage for thousands of dollars monthly or face cutoff.

Thousands of catch basins are full of debris, making flooding probable during major rains of a couple or more inches of rain. Two rains last summer resulted in catastrophic flood damage to property which the Sewerage and Water Board just hired the law firm of Stone Pigman to defend the S&WB from damage claims. The S&WB would save money by admitting liability for legitimate claims and pay people for their losses.

Who benefits? CH2M is the largest engineering company in the United States.  It has more than 100 employees in New Orleans and was represented in a recent pre-bid conference to parcel out 300 S&WB jobs in what I think is a privatizing of S&WB.  Councilperson LaToya Cantrell received at least $5,000 in campaign contributions from CH2M. Other office holders may have too. Mayor Mitch Landrieu’s bid to become the president of the United States will likely be financed with contributions from large engineering firms who feed at the S&WB.

Yet some of S&WB’s critical staff have not gotten raises in 20 years. Mayor Landrieu kicked council members off the S&WB in 2013 and re-organized with a yes board. Cedric Grant, not an engineer, did not have qualifications to run S&WB. The qualifications had to be changed by the legislature. Once head of the S&WB Grant created several deputies making huge salaries and making big decisions like not hiring meter readers and not cleaning out catch basins. All of this resulted in low morale, and a workforce anxious to organize and save the City from an S&WB sale, or other forms of privatization.

A new coalition formed after the August 8th flood. The Sewerage and Water Board Fight Back Coalition will host a Town Hall meeting Tuesday November 14 from 5:30 to 8:30. The Coalition demands are listed below:

Persons are asked to bring water bills to the Town Hall meeting. The Coalition will fight to get back the money our citizens have been overcharged. We will also work with an investigative agency to determine who is responsible for this train wreck and prosecute the conspirators to the fullest extent of law.

Leading organizations in the Sewerage and Water Board Fight Back Coalition include: The People’s Assembly; The NAACP of Orleans Parish; The Service Employees International Union;  The Sierra Club; Justice and Beyond; Step Up Louisiana; and The AFL-CIO of Greater New Orleans, National Association of Letter Carriers Branch 124.

The Sewerage and Water Board Fight Back Coalition