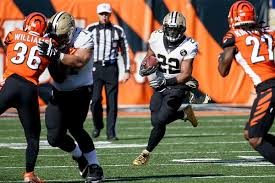 A Look at the Last Four Games

On their way to the Super Bowl (yep I said it), the Saints breezed through the 2nd quarter of the season. They went a perfect 4-0. Two wins were beat downs, one a nail biter, and the other, a win against the Rams that had the crowd ready to blow the roof off the Super Dome. I guess you could say they’re streaking.

While on their way, Brees has been Brees, throwing 18 touchdowns and 1 interception. Kamara has been Kamara, an All-pro, all-purpose running back. And Michael Thomas, when he’s not pulling out a cellphone, has been absolutely awesome, like case for best receiver in the league type awesome. The league fined him $30,000 for impersonating Joe Horn (ouch).

Beneath it all, though, it’s been the offensive and defensive lines that have been the stock in the pot, the roux in the gumbo, the barley in the beer (you get the point). Both lines have continued their great play from the 1st quarter of the season. Thanks to the defensive line clogging up the running lanes, the Saints are still number 1 against the run – giving up only 76 yards a game. Not only has no running back gained over 100 yards on them, but only 1 team (Tampa Bay) has managed to do so.  The offensive line has been just as good. They’ve only given up 9 sacks all year. That’s tops in the league. Also, due to their blocking, the team has been averaging over 30 rushes a game. On that note, lets give out some awards.

2nd quarter Offensive MVP: Sean Payton. Look no further than this stat: 134 rushes to 119 passes over the last 4 games. The Saints run heavy? (Yep) Who woulda thunk it? So much so, that in 3 of the last 4 games, they’ve actually run the ball more than they’ve thrown. That’s maturity right there. It took him a while, but yeah, Payton has finally matured as a play caller. The Saints are no longer a pass heavy finesse offense that gets pushed around by more physical teams at home and on the road. This year, they’re the ones doing the pushing. Case in point: October 21st, the Saints go to Baltimore and ram the ball down the throat of the league’s best defense 39 times. That would’ve been blasphemy in years past.

2nd quarter Defensive MVP: Marcus Davenport, the rookie. Yeah he got hurt and missed the Rams game. But Davenport was on his way to justifying the 2 draft picks (one being a first rounder) the Saints gave up getting him. In his last 3 games, Davenport racked up 3 sacks and a forced fumble. He had 1 sack and no forced fumbles before that. Sheldon Rankins was right behind him though. Rankins also had 3 sacks, but he got them in 4 games instead of 3. Cameron Jordan, despite not having the sack stats, is constantly pressuring the quarterback and playing the run well.

Still, there are reasons to be concerned. For one, the secondary is atrocious. No lead is safe when a quarterback drops back to pass. Besides Michael Thomas, the other 3 receivers on the team have only caught 17 passes combined. The schedule is brutal. Eagles, Falcons, Steelers, and Panthers twice, not inviting for securing home field advantage. Mark Ingram hasn’t found his groove yet. In the 4 games since he’s been back, he’s averaging less than 4 yards a carry and has fumbled twice.

Update: ignore the last paragraph you just read. The Bengals game, the 1st one of the third quarter of the season, was going on during the writing of this. It’d be an understatement to say things went well. The Saints beat the stripes off the Bengals, 51-14. No need to be concerned. The secondary balled (2 interceptions). A receiver other than Michael Thomas caught a 42-yard pass. Mark Ingram got his groove back. He ran for over 100 yards. There were numerous shouts out to Dez Bryant in the end zone. Brees only had 3 incompletions. Bet on it.  This team is going to the Super Bowl. Who Dat!