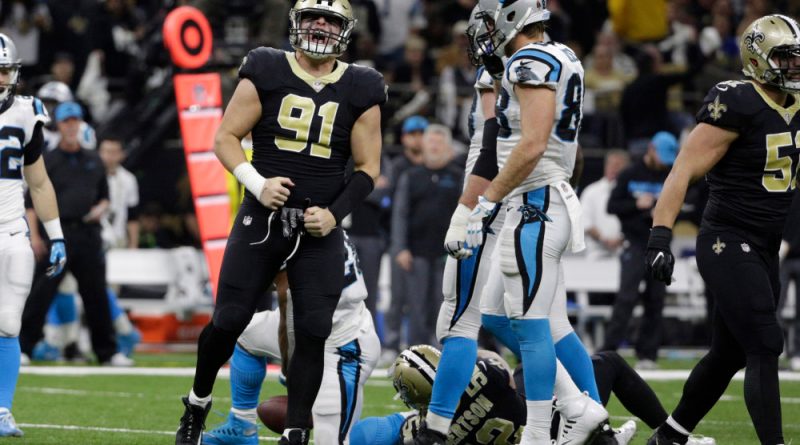 And another training camp is in the books!  All that’s left is 1 more preseason game for players on the bubble to make their final impression. For the most part, though, the roster is already settled. Now that they’ve broken camp, it’s time to give out some awards. Unlike the Oscars we won’t save the best for last. Straight into it, here’s your Think 504 training camp MVP. And the winner is…

This has to go to Trey Hendrickson (Defensive End, #91). Reports were that he’d been tearing up the backfield in practice, and his performance in the preseason games confirms this. This new, more muscular Hendrickson has been a dominating force — stout against the run, coming hard off the edge punishing quarterbacks, whether he’s lined up on the left, in the middle, or on right side. Throughout camp he’s been everything the Saints hoped Marcus Davenport would be (don’t sweat it, Marcus. It took Cam Jordan 3-4 years to become the player he is now).

Most Disappointing and Most Improved

If he’s not throwing the ball high, he’s throwing it behind receivers, or worse not throwing it at all, instead holding onto it a cringe worthy amount of time, making one (me) feel that if he’s pressed into action, he’ll end up leading the league in being stripped sacked.  No, I’m not talking about the Taysum Hill project. I’m talking about the Teddy Bridgewater. Bridgewater came into camp poised to solidify himself as the heir apparent to Drew Brees. Now that camp is done, here’s to hoping that he never sees the field during the regular season. Bridgewater’s stock has fallen like the Dow after one of Trump’s tariffs, solidifying him as the most disappointing player this training camp.

Yes, some will say Bridgewater has been paired with backup offensive linemen and been under constant pressure, and that he’s not had any game action with Michael Thomas or Alvina Kamara. But neither has Taysum Hill. Yet when Hill’s on the field leading backups against backups, he’s clearly the best player on the field. Hill seems much more confident in the pocket than Bridgewater. And Hill is much more accurate and decisive with his throws. Much to the chagrin of the editor and CEO of Think 504, Hill has to be awarded the Think 504 award for Most Improved Player this camp. The only reason to keep Bridgewater around at this point is to have a backup in case Hill gets hurt running the ball, catching a pass, covering a punt, or any of the myriad of things Sean Payton has him doing.

Kickers aren’t sexy. Like offensive lineman, they rarely get attention unless they do something great or something terrible. Wil Lutz has elevated the art of field goal kicking to even more mundane levels. There was a time when I’d grip my beer as tight as I could when he’d line up for a field goal. Now, I just think about whether the returner will run it out the end zone or settle for a touchback during the ensuing kickoff. When he missed his first field goal in ages Saturday night, I figured the earth must’ve had a slight wobble off its axis. It couldn’t have possibly been Lutz’s fault!  Turns out it wasn’t. The holder, Steady Eddie #2, punter Thomas Morstead had the laces turned the wrong way. That says a lot about your kicker when you’re more worried about the hold than the kick.

Every year, there’s some unheralded player who stands out at camp and leaves you wondering how’d every other team overlook him, and how’d the Saints find him. For most of camp, that person was wide receiver Emmanuel Butler. During practice, Butler was being dubbed as the next Marcus Colston. However, Butler might be only a practice phenom. During 3 preseason games, he’s caught one pass and dropped at least 3 catchable passes.  Deonte Harris, though, has shown up in practices and the games. As a punt returner, he gives the Saints something they haven’t had since the days of the Beer man – a legitimate threat to bust one whenever he touches the ball.

Well that is a wrap on the awards. In a week and a half, the Saints will be kicking off their first regular season game. Who’s ready for 16 gamedays of stressed out livers and nerves?

One thought on “Saints Preseason Awards”