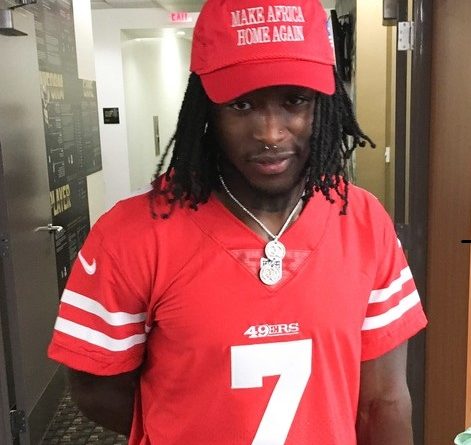 Doesn’t he know the people wanted to love and idolize him?  But to be loved by whites, black athletes must accept certain parameters.  They can’t be talking about black issues.  But more importantly, they should never talk about black issues.

Some Saints fans were aghast.  Vowed to protest.  Felt insulted and just about promised to quit going to Saints games….. Well maybe they wouldn’t go that far but boy were they mad.   How dare he! Some of these guys just don’t get it.  And when Saints superstar Alvin Kamara donned a Colin Kaepernick jersey and a Make Africa Home Again cap, some Saints fans unleashed a hissy fit.

Comments on websites and radio shows were consistent.  First people swore to never wear Kamara’s jersey again.  And they all wondered why professional athletes could not just stick to sports.  “Just play ball man, that’s all I want.”  Another commenter said, Come on young man – take that stuff off and keep politics out of sports….PLEASE…  And yet a another said, “Just run the ball AK.”

In the midst of NFL teams wearing pink to promote cancer awareness, the hypocrisy and bias of the NFL is there for anybody who simply opens their eyes.  Certainly, fans see the pink sweatbands and cleats and towels worn by players during the month of October.  In fact, the NFL has promoted cancer awareness for nearly a decade, and while many fans were initially shocked by the pink colors the players wore, there have never been any fans threatening to burn jerseys or stop attending NFL games.  But when players insist on promoting awareness to police brutality, a double standard is clear.  Just sports baby.

Who can be against Cancer?

While wearing pink on a football field initially shocked fans, the notion that it was to bring awareness to the seriousness of breast cancer calmed the fears of fans looking for big hits and fast runs. Cancer awareness is considered a universally binding topic all people can get behind, but taking a knee and promoting awareness of police brutality and economic injustice is a controversial subject. Players taking a knee and similar awareness campaigns have alienated many fans. In fact the act of kneeling during the anthem was attacked by people who simply do not want to be bothered with the issues that agitate the calm of NFL football.  Hence, we hear, “Shut up and dribble,” from Fox News commentators.

Are Some Whites OK with Police Brutality and Economic Injustice? 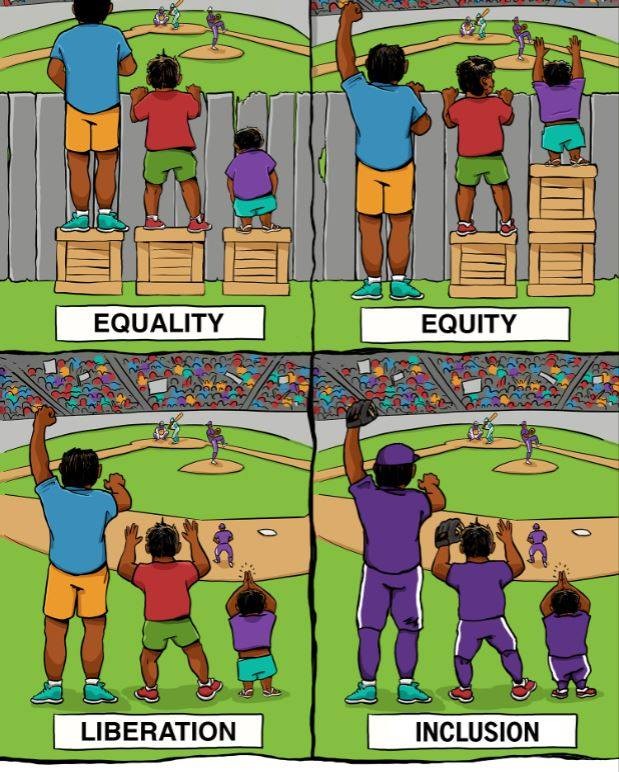 Alvin Kamara showed tremendous courage and keen social consciousness.  Sadly, that issues of police brutality and economic injustice do not have the same universality as cancer reflect a certain bias in America. While pink jerseys and sweatbands are commonplace now, the same fans do not want the “outside noise” of issues viewed as African American interfering with their football.  Can’t you just see Bubba’s belly poking out from his undersized pink accented #9 Saints jersey, proclaiming players should just stick to football?

Often people say that justice for African Americans can only come at the expense of white status.  Others theorize that for people of privilege, equality seems like oppression.  Actually, for people of privilege, equality is only oppression when the privileged desire to oppress and not expand the field of opportunity.  We all do better when we all do better.  The expanding pie feeds us all.

Unfortunately, many people see economic opportunity as a zero-sum game, meaning that any significant opportunity provided to African Americans must be viewed as a something significant taken from the white community.  It’s easy to see how many whites subconsciously view police brutality and economic injustice as necessary tools to provide adequate resources to their families.  For them,  Kaepernick and now Kamara represent a real threat to the very security of the “American family structure.”

Changing people’s minds is a monumental task.  It starts with brave men like Colin Kaepernick and Alvin Kamara.