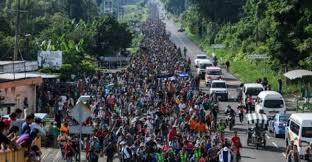 Military Presence Applauded by Many

Reports claim 7,000 people from Central America and Mexico are walking toward the border seeking to enter America. Meanwhile, President Donald Trump is sending 800 troops to support the 2000 troops already there to stop them.  The looming border showdown will be must see TV.  Like an approaching hurricane, you know this can be bad, very very bad.

With the mid term elections as a backdrop the idea that the military might use lethal force to stop people seeking entry is fascinating.  Do members of the caravan have a strategy?   What will the Mexican government do?  Suppose gunfire erupts?  Will US troops fire on Mexican troops?

This is a culture war.

Trump will have you believe that America’s very existence is at stake.  He claims that “Middle Easterners” were amongst the group of mainly Hondurans, who are walking over 1000 miles escaping poverty and violence.  His attempts to demonize the migrants as rapists and bad people seed fear and discontent.

There are many Americans who welcome diversity and the challenges and opportunities new immigrants bring with them. Concern abounds about housing and jobs and education for the new arrivals.  Other Americans want them stopped humanely but denied entry into this great country.  Others hate the immigrants and believe they have no place in America.  Everybody fears what might happen to this mass of moving people.

President Trump is a master manipulator of the fear some Americans perceive.  For many the overriding fear is some decrease in the access to resources. A huge swath of Trump’s political base fears that deserving Americans have lost access to and control of resources and his job is to return those resources to them.  Doing this will make America great again. 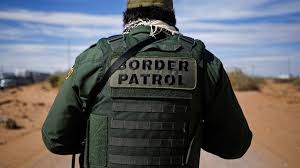 NUMBER OF WHITES IS SHRINKING IN AMERICA

A big factor in this fear is the shifting demographics in America. This foments the rise in white nationalism.  Soon America will no longer be a majority white country.  In less than 50 years whites will go from 62% of the population to 46% of the population.  And the fastest growing immigrant group will be Hispanics.  If Hispanics continue to flow into the country unabated the political and cultural power of America can shift even faster.  And this caravan epitomizes the potential problem and the reason border security is so important to Trump and his base.

The current political structure is aimed at protecting the status quo.  Gerrymandered political districts and voter suppression tactics dominate the political landscape. Employment discrimination and wage disparities are increasing dramatically today.  Even in a market where African American employment levels are higher than recent years, wage gaps coupled with a lack of full time hours disenfranchise many minorities.  But the overriding fear is that so many Hispanics will flood the country, that some sudden and dramatic economic upheaval might occur.  Yet even after an influx of Hispanics, white Americas will still be the largest group in the country.

Still, Trump goes on TV and says rapists and gang members are flooding the country.  According to Trump, these people are not just illegal but unworthy of the limited resources available in America.

We Do Have an Immigration Problem

Hispanics from Central and South America are regularly denied legal entry for bureaucratic reasons.  Subsequently people cross the border without any documentation.  However, many come ill prepared to seamlessly transition into American life and sometimes need expense draining services.  The swing to conservatism in government in the past 40 years, means local governments are bare bones machines barely able to inefficiently deliver mostly basic services. Sudden and new needs are not easily funded. For example, English as a second language education is forcing some school districts to cut back after school activities funding.  Citizens fearing their resources will be further diminished resent immigrants and their new costs to public education, even though people regularly hire immigrants for day work. 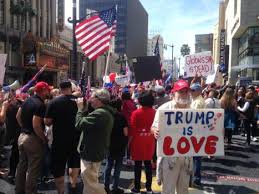 Schools have had after school programs for decades. Friday night lights is a thing across America. Cutting the football budget just 10% is sacrilege.  But some school systems have had to secure funding for special language programs and cutting any traditional program breeds resentment and hostility.

When privileged people see others’ attempts for equality, privileged people experience discrimination and an attack on their status.   Hispanics daring to attempt to force school systems to make costly special accommodations for their children raises the ire of many Americans. If a school is forced to end an after school special dance program to hire a few Spanish speaking teachers, then even those white parents whose children don’t take dance feel attacked.  After all, everybody’s tax dollars built the special dance studio on the school campus.  “Why can’t those people learn English if they want to go to our schools?”  Protests result, and parents and children alike look cross eyed at Jose, Maria and their parents.  And Trump’s wall seems more reasonable.

The Wall Is A Great Option

President Donald Trump masterfully exploits this anger. Trump’s inflammatory grandiloquence provides tonic for the stressed and angered “real” American parents. Previously welcoming parents suddenly change.  Maybe Jose’s dad is a rapist.  Just saying he did look “kinda’ rapey” when he was pulling that poison ivy off the fence and replacing the entire side of bad fence boards.  But for sure Jose’s dad has not paid any property taxes.  So, when Trump disrupts the influx of even more immigrants and grabs their children, maybe that is a viable solution for some white parents and their children’s dance classes. Football or the caravan?  Parents clap loud when Trump says we are going to stop illegal immigration.  Emboldened Trump sends the military to the border to prevent the marching caravan.

Even though the Mexican government has harassed and intimidated many in the caravan and the number seems greatly reduced, there are still thousands who are continuing their push toward the border.  The troops and their resources are in pace and plan to deny all entry into this country.  If 500 women and children rush the border what is going to happen?  How will the armed military soldiers stop them?  If there was a wall, maybe the military would not be aiming guns at people looking for a better life.

One thought on “Why Americans Want to Stop the Hispanic Caravan”