Conservative and liberal state legislators were aghast.  “How could she?  How could she bring a convicted felon to one of our meetings? That is no way to build trust.”  Our state legislators were working in good faith to determine that LaToya Cantrell can be trusted.  But then she goes to a public meeting and there’s a convicted felon in attendance?  In Louisiana? C’mon man errrr woman. 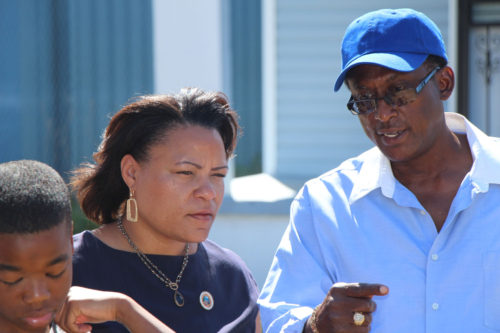 It took a lot for these conservative white male legislators to even go to the church and meet with the liberal woman mayor of New Orleans. They displayed their own open mindedness and progressive nature. They were all set to listen to what she had to say and then give her some important and meaningful feedback to help her be a better mayor.  But how could they talk freely?  Derrick Shepherd was in attendance.  Talking to the newly elected woman mayor is one thing, but having a black man who was convicted show up was completely distressing.  He actually served time in jail.

And when the local media got wind of the story, they immediately provided the great service our citizens can expect from the New Orleans press. A completely biased and totally comprehensive listing of every charge -proven and unproven – along with a retelling of each and every conviction and the time Derrick Shepherd served in prison.  Nobody can make a black man look bad better than the New Orleans media.  And op-ed pieces flew off the computer screens.  Cantrell needs to start naming names, opined one.  Derrick Shepherd is just a bad choice claimed another.  Typical New Orleans corruption said a third.  And on and on.

White supremacy is not just a pie in the sky concept that whites are somehow intellectually superior beings, but more essentially a system of political domination and economic disenfranchisement or minimization for African Americans, particularly African American men.  The key scheme to completely marginalize black men has been to over police in black neighborhoods and convict and severely punish with extremely long prison sentences and then limit the job opportunities once those same men are released from prison.  Just last year a Louisiana legislator introduced legislation that would make a convicted felon’s ability to vote or get a  job  virtually impossible.  And the racist narrative that we are continuously fed is that black men are incorrigibly bad by nature and should not be trusted.  The recent police shootings and subsequent acquittals are just the most recent examples of this national sentiment.

Stated so often that the reality is diminished and trivialized, Louisiana still puts more people in jail per capita than anywhere else in the world. Nearly 80% of the men in jail in Louisiana are African American. The rampant racism that produced this phenomenon is evidenced by the reaction to Shepherd’s appearance at the meeting. Immediate suspicion of Cantrell resulted.

But this year the state legislature, in a cost cutting move, began to reduce the prison population across the state.   In fact Louisiana will reduce its prison population so much that next year the state will rank 49th .  9000 black men thank you!  But imagine the job prospects that these men face upon reentry into society when a mayor is shamed and pressured for possibly associating with a released former state senator. There is some light at the end of the tunnel for these men who were recently released. Louisiana has the best rehabilitation program in the world.  Cause now each of these men will be able to apply for a job with the electrical,plumbing or culinary  trade they learned in prison.  (I have 3 lots in the lower 9th ward I will sell you for $90K apiece if you believe that one).  If only.

In fact, with so many convicted felons seeking jobs across the state, the Mayor Elect would do good to hire some convicted felons.   Men who have paid their debt to society should be afforded the opportunity to work in good jobs and honestly provide for their families.  Start with the 400 job openings at the Sewerage and Water Board.  The SWB has a long history of hiring, training and gainfully employing our men to keep our streets dry.  We all need that.  The convention center is sitting on hundreds of millions of New Orleans tax dollars.  They should have a jobs program too.

But I do agree that Derrick Shepherd is not a good choice for Mayor Elect Cantrell to hire.  Not only is he more Claudette Colvin than Rosa Parks, but mainly because he does not live in New Orleans.  God knows we have some of the best convicted felons in the world seeking a good job.  Please hire some of them Mayor Elect Cantrell and ignore the likes of Conrad Appel and the short sighted local press!

4 thoughts on “Real Reason Cantrell Should Not Hire Shepherd”