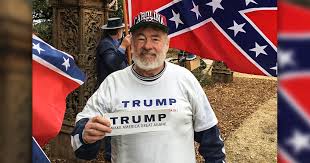 Donald J. Trump’ is a racist and a white supremacist. Trump launched his presidential bid with an attack on Mexicans: “They’re drugs, they’re bringing crime. They’re rapists.’  He disparaged brown and black people from what he called “shithole” countries. He called NFL players, who protested police brutality, the majority of whom are African-Americans “sons of bitches,” and called for a ban on people from Muslim countries, among many other racist verbal attacks on people of color.

Trump’s racist rhetoric has produced a ripple effect. He has unleashed and emboldened whites with racist tendencies to harass people of color. Racists have called police on blacks barbecuing in a public park, on a black boy who mowed the wrong lawn, a young black girl selling lemonade, a black youth selling hot dogs, a black guy at a pool in his own condo complex and black people in the Waffle House and Starbucks incidents have been subjected to humiliation by average whites.

The Guardian reported that on June 14, Mia Irizarry was verbally assaulted by 62-year-old Timothy Trybus for wearing a Puerto Rico flag on her shirt. Irizarry was enjoying an outing with family at the Caldwell Woods Forest Preserve in Chicago. A cop standing a few feet away ignored her pleas for help, “You should not be wearing that in the United States of America” and “You’re not going to change us, you know that,” Trybus told her. Irizarry captured the incident on Facebook Live video.

On May 15, 2018, Aaron Schlossberg, a New York lawyer, threatened to call ICE on employees at a New York deli for speaking Spanish to Hispanic customers.

Breathing while black or brown has become a dangerous liability. During the height of the 2016 election, Trump’s rhetoric fu 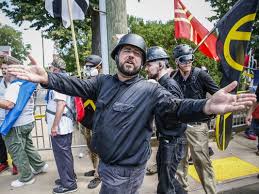 eled a spate of racist attacks by Trump supporters.

Kashiya Nwanguma was a 21- year-old African-American college student, Molly Shah was a 36-year-old White mother, and Henry Brousseau was a 17-year-old White transgender high school student when they attended the March 1, 2016 Trump Rally in Louisville, Kentucky. Nwanguma held a poster depicting Trump’s head on the body of a pig. After Trump yelled, “Get ‘em out of here,” they were attached by Alvin Bamberger, a Korean War Veteran and Matthew Heimbach, a leader of the white supremacist group Traditional Youth Network from Paoli, Indiana.

The protesters sued Trump, Bamberg and Heimbach. Oral arguments were held in Kashiya Nwanguma v. Donald Trump on June 6, 2018, in which the protesters attorneys argued that Trump’s rhetoric incited his supporters to act violently. A federal judge had earlier rejected Trump’s free speech defense in the lawsuit.

During a June 6, 2018 U.S. 6th Circuit Court of Appeals appearance, in which Trump’s  lawyers are trying to get the case dismissed, they said he was exercising his free speech rights and that when Trump said “Get ’em out of here”, he didn’t intend for his supporters to use force.

At the hearing, the protesters’ lawyer argued that Trump had been encouraging violence against protesters at six previous rallies. At those rallies, Trump has “implicitly encouraged violence.” The 6th Circuit has not yet ruled on Trump’s appeal of a lower court ruling that found the case could proceed.

Ironically, Bamberger’s lawyers effectively agreed with the protesters, that Trump was inciting violence.  “Alvin Bamberger had no prior intention to act as he did. Bamberger would not have acted as he did without Trump and/or the Trump Campaign’s specific urging and inspiration.” Bamberger can be seen in a video  pushing Nwanguma, at the rally.

The Lawyers Committee for Civil Rights filed an amicus brief in the case, stating, “Supporters of Defendant (Trump) called Nwanguma a “nig*er” and a “c*nt” and used other racial and ethnic slurs against her. Defendant’s supporters, including Alvin Bamberger and Heimbach, assaulted, struck, and shoved Nwanguma through the crowd, physically forcing her out of the rally. Supporters of Defendant also attacked Brousseau and Shah. One of the TWP members punched Brousseau in the stomach; Heimbach and others shoved and pushed Shah.

According to the Southern Poverty Law Center which monitors hate groups, Heimbach, a neo-Nazi, was once billed as the new face of the far right and racist movements, “a young, media friendly and savvy personality who headed what appeared to be a growing organization with TWP.”

“When racists “alt-right” members and adherents gathered in Charlottesville, Virginia, in August 2017 for the Unite the Right rally, Heimbach was to be a featured speaker. Heimbach pleaded guilty to disorderly conduct in the assault of the protesters and was given a suspended sentence with the admonition to stay out of trouble for two years,” according to the SPLC.

The court’s slap on the wrist, notwithstanding, Heimbach’s suspended sentence was revoked in May 2018, for a domestic assault on family members. He did 38 days in jail before being released.

Eight days later, at a pro-Trump Rally in Fayetteville, N.C., Trump promised to pay the legal fees of supporters who attack anti-Trump protesters.

It was at that March 9 event that John McGraw, 78, sucker punched Rakeem Jones, 26, a protester who was being led out of a Trump rally.  According to news reports, “McGraw defended his actions, telling Inside Edition that he enjoyed punching and that the protester “deserved it.” “You bet I liked it. Knocking the hell out of that big mouth,”

McGraw added, “The next time we see him, we might have to kill him. We don’t know who he is. He might be with a terrorist organization.”

However, in court, Mc Grew apologized to Jones and was sentenced to 12-month unsupervised probation stint for misdemeanor assault and battery.

Clearly, no person of color is immune from the verbal and physical assaults from Trump supporters or from the complicity of America’s white-dominated judiciary and law enforcement..

Actor Ving Rhames recently reported that in 2016, he was held at gunpoint by cops at his own home, after a neighbor reported a ‘large black man’ breaking in.’ Republican Senator Tim Scott said he has been stopped by police seven times in one year as an elected official. And basketball legend, LeBron James, has had to remove the word “Nigger” from his property.

What’s wrong with this picture? Stay woke and vote.

One thought on “Racists Gone Wild!”