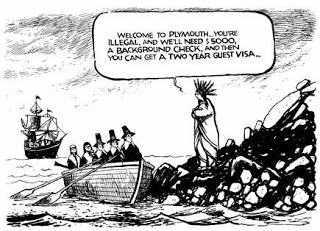 While watching the United States Supreme Court vetting and confirmation proceedings last week, I was seized with a stark self-realization.  That realization was that I agree with Trump – a person whom I ordinarily find to be most disagreeable. The Senate proceedings, the partisan divide, men/women dynamics in social as well as workplace settings, America’s political culture – all this and more – has brought President Trump’s words into sharp focus for me.  We have an immigration problem.  Yep. Illegals are to blame for it all.  I find the children of illegals to be especially culpable, specifically the children of those illegal pilgrims: they bring crime, rape, torture, genocide, disease, and they set up their own form of government and subject you to it.  How does the line of the famous song go? “. . . Land of the pilgrims’ pride, land where my fathers died, from every mountainside, . . .”, yada, yada.

The farce that is America could not be more evident (although I am sure she will outdo herself as the weeks unfold) than through the entire activity of the confirmation proceedings: the short shrift given to an alleged attempted rape victim’s claims, Republican attempts to, in their words, “. . . ram this thing through) in an effort to confirm a person with a particular jurisprudential bent, the obvious desire to not investigate a potential crime because it would disrupt the seating of the desired candidate, partisan bickering, and the general disfunction of this form of government.

You people, you pilgrims and pilgrim children, you came here for a better life.  You have achieved that, but at what cost to the rest of us? Granted, some non-pilgrim descendants enjoy your material benefits, but what about the masses?  The intent was never to provide a better life for any but yourselves and your descendants.  You are as much of a despicable colonizer as any of the European nations that scandalized India, Asia, New Zealand, Australia, and the continent of Africa.  The red-colored people that you encountered when you came here were either killed off with guns or disease, co-opted, or forced to accept your illegal alien culture, its religion, mode of dress, hairstyles, and organizational oppression, i.e., developing form of government.  What about those other “immigrants” that did not want to immigrate here, the Africans?  Do you remember their inhumane treatment by some of you while others tried to figure out ways to resolve the issue?  Do you remember the plight of the Chinese railroad builders?  What about how begrudgingly you “allowed” the Irish and the Jews to become members of your exclusive immigrant club?

What do you want from me, America, an angry reddish-black guy? Wait for the next election cycle and hope things get better? Shut up and take it? Want me to go back to Africa or some other country and leave you be?  The written words of your imposed constitution say that all are represented (that we do not even have to represent ourselves but someone will do it for us).  Who in your Congress knows me or cares for me and has the power to effect change?  After all, your immigrant ways only allow for two political parties (in stark contrast to most liberal democracies on earth, such as India, the world’s “largest” democracy) for me to be heard.  That is like only being able to chose black or white when there are so many more other colors in the crayon box.  This two-party-only tactic has gone a long way toward suppressing opposing opinions, alternative systems, and outright progress toward a more fair and equitable system of government.  Of course, these are things you immigrants do not seem to want.

Now, I do not want to paint all immigrant children with the broad brush.  I know that many children of those original pilgrims actually have good hearts, are good people, and want to do the right thing and achieve a just society.  It is just that the foundations of your society are faulty.  America, alas, has been built on “constitutional quicksand.”  The hypocrisy of the founders is what we all live by and under.  Many, if not most, look at the progress America has made since its founding.  I disagree.  Our progress has been mostly in the technological realm.  Technologically and materially, we live like “the Jetsons.” In terms of America’s governing and socio-political structure, we are still governed by backward pilgrims.