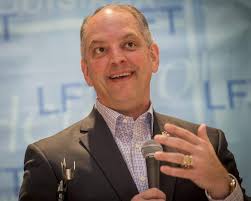 Probably so. Maybe not. Who knows (yet). Here’s the deal, the state finds out that it has $300 million left over from last year’s budget, making it the first surplus the state has had this side of Katrina. Memos are immediately sent out. The press is notified. The governor announces that this a true popping bottles moment. But before he can let the corks fly, there’s all kinds of questions about the money, questions like: Where’d it come from? Why’d it come from where it came from? And what’s going to be done with it now?

The governor is like, the money came from this growing economy of ours. He says incoming corporate and income taxes are up, a sign that the state is finally crawling out of the dark ages Bobby Jindal left it in. To the governor, this is great news that he can claim credit. People typically associate the state of the state with the people running it. So, if he’s the governor and the state is doing well, that means…

But some Republicans and members of the press are like, wait a minute. You just took in $300 million more in taxes than you needed to. That’s one big accounting error you’re asking us to celebrate. Then in a moment, which to the governor can only be summed up as pure partisanship, those Republicans began to wonder: did the governor know there’d be a surplus all along, and withheld that info so he could extend an expiring sales tax hike?

Side note: barring any info the governor can provide as to how any change in state tax policy affected the incoming taxes, the credit for Louisiana’s economy would have to by default go to president Trump. Given the aforementioned right to claim credit, it’d follow that if the economy is doing well nationwide, and Donald Trump is president, then that means…

So, then there’s the question of what to do with the money. The governor is like, lets spend it on new capital projects. In other words, he wants to build the foundation for his reelection campaign. What better way to do that than to dole out construction dollars to legislative districts. Come reelection time, it’d be great for him to be able to turn to a legislator and say, hey I made it rain in your district. Now get that vote out for me. The Republican response has been: we got bills to pay and a rainy-day account to replenish before we go spending money on new projects, a turd in the punchbowl moment, but considering the state’s finances, probably a fiscally responsible option.

By law, the money can only be spent on the capital budget, paying down debt, or stashed away in the rainy-day fund. While those options are all fiscally responsible, only the outlays in the capital budget are sexy and marketable and let politicians cut ribbons in districts across the state. Where it ultimately goes will come down to a compromise between the legislators and governor, which means it’ll probably take them 4 or 5 special sessions to figure it out.