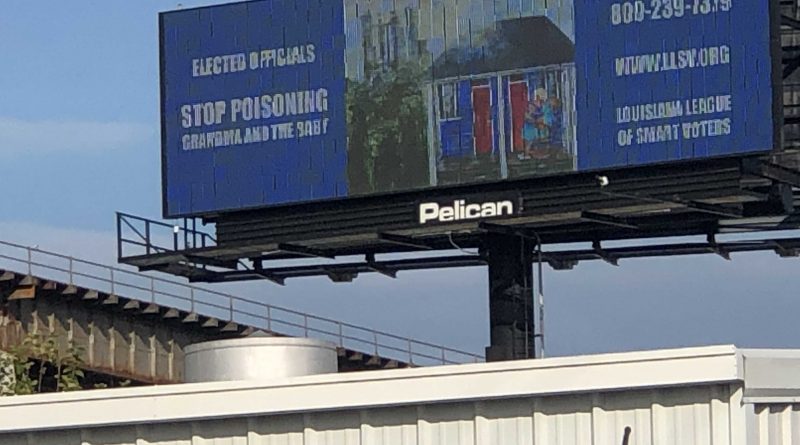 Politicians Asked to Stop Genocidal Poisoning of Grandma and the Baby

A new advertising campaign to bring attention to the genocidal poisoning between New Orleans and Baton Rouge and climate change has raised the issues through billboard advertising.

Launched by the Louisiana League of Smart Voters (LLSV), the first billboard features the message “elected officals stop poisoning Grandma and the baby.” The campaign launch during the election season features hip hop adds on radio, newspapers, cable and television. The first add was placed with Pelican Advertising and is shown to East Bank drivers on the Huey P. Long Bridge near Elmwood and on the Airport Road from Airline to Veterans.

The common thread throughout the campaign is political decisions created environmental injustice and rising consciousness of voters will be the driver that changes the actions of political leaders. What once seemed to be a threat to people of color and poor communities, chemical production and oil and gas activities are clearly threatening  the earth with global warming and climate change. A little more than half of the carbon released into the environment in Louisiana is done by chemical and oil and gas manufacturers. Register and vote. Use the weapon so many people died to use. We have a responsibility to vote to save the planet.

The ad features a painting of an older African-American woman on the porch of a house sitting in a rocking chair holding a baby. In the background is a chemical company with what appears to be smoke or chemicals flowing over the house, Grandma and Baby.  The image describes the situation of tens of thousands of families in “Death Alley” the area between Baton Rouge and New Orleans formerly called “Cancer Alley”.  Industry and government leaders for decades denied cancer rates in the area known internationally as a zone of national sacrifice.  The artist, Shelia Phipp, is an internationally recognized painter, who resides in the New Orleans area.

Recently researchers released a peer reviewed study of Reserve, La communities near DuPont/Denka. The study, commissioned by the Concerned Citizens of St. John the Baptist Parish, and performed by Stanford University and the University Network for Human Rights found that people living closer to the plants show higher and, in some cases, epidemic levels of cancers and other diseases. That study is backed up by EPA risk estimates that the risk of cancer in zip codes where the plant is located are a hundred times the national average and the levels of one chemical substance, chloroprene, is hundreds of times more than the EPA says is safe. Governor John Bel Edwards convened the La Department of Environmental Quality and Health and Hospital to study the situation. Meanwhile, Governor Edwards has promised, Coalition Against Death Alley members for 9 months to meet with leaders of Reserve and other areas affected by chemical plants.

In St. James Parish the Coalition Against Death Alley called on Governor Edwards to close down Mosaic’s St. James facility, long the center of controversy in Louisiana. Once owned by Jim Bob Moffett, the company has been stacking little mountains, 200 feet high, of radioactive gypsum. Denied permission to dump the gypsum in the Mississippi River in the 1980’s, the company’s disposal of the hazardous radioactive waste has taken several twists and turns. The operation settled out of court with the EPA to make changes which have not happened.  The gypsum has been moving at least one inch a day toward waterways most of 2019 without Governor Edwards’ intervention. Last week the company announced it would close down for 30 days.

Across the Mississippi River from Mosaic, CADA leaders support RISE St. James efforts to stop Formosa plastics $9.5 billion proposal to build the largest plastic facility in the world with 14 different operations in the middle of a Black community, Welcome, struggling to overcome more than 30 chemical plants already there.  The operation would release tens of millions of cancer causing and hazardous substances in the air, land and water yearly.