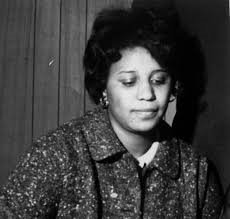 The young, teenage Oretha Castle probably just wanted to wile away a few hours shopping leisurely on the strip. Who knew that she would not only become synonymous with civil rights leadership in Louisiana, but that her name would eventually replace that very New Orleans street which refused to serve her kindly?

“The New Orleans Jazz Market is located at Oretha Castle Haley and Martin Luther King boulevards. I wanted to show how Oretha Castle Haley’s life is a reflection of the spirit of Martin Luther King Jr.’s life, focusing on the civil rights movement in New Orleans and what was achieved,” Bill Rouselle, the film’s writer, producer and chief interviewer, said.

“The intent is to capture people who worked with Oretha, CORE (Congress of Racial Equality) and beyond. To give a glimpse of what she was all about.” Rouselle, once a young journalist, was mentored by Haley and knew her as a big sister.

“I came up with the idea for it two months ago. It’s been in my head for the last 10 years,” Rouselle said.

The 15-minute short is just a part of the New Orleans Jazz Orchestra’s three-day celebration of Haley, the civil rights leader, community organizer, political strategist and health administrator who mentored and developed a generation of future leaders in black New Orleans. Haley defied gender and racial constructs in the 1960s, ‘70s and ‘80s with her fearless activism.

She was a founding member of CORE-New Orleans, was carried out of City Hall in a chair during a 1963 protest with her sister Doris and later served as CORE’s field director for northern Louisiana in 1964. Then known as Castle, Oretha (O-reth- ah) administered anti-poverty programs, successfully integrated New Orleans Recreation Department playgrounds in 1966 and co-founded Black Organization for Leadership Development (BOLD) in 1970. In 1967 Oretha married Richard Haley, a nationally known civil rights activist and professor of music. The two had four boys.

In 1971, Haley successfully managed the campaign which made Dorothy Mae Taylor the first black woman elected to the Louisiana legislature. Taylor later went on to serve several terms on the New Orleans City Council and in 1989 spearheaded the charge to rename Dryades Street Oretha Castle Haley Boulevard.

“New Orleans was no different from any other metropolitan city,” says Don C. Hubbard, a contemporary who knew Haley when she was a student at Joseph S. Clark High and he was in school at Walter L. Cohen High. Haley was friends with his now-wife, Rosetta. “We had this understanding we grew up under with [racial] segregation. We thought we should do something about it. Oretha was one of the charmed young women in the neighborhood. She was the only one to sit down at the [Woolworth’s] lunch counter with three young men.

“She never took the position that she wanted to leave,” said Hubbard, who was in CORE with her and later co-founded Southern Organization for Unified Leadership (SOUL), another black political organization, with Haley in 1964. “Other young women would see the strength in Oretha and it gave them confidence to follow her lead.

“Oretha always had a Plan B. The goal was never to just sit in. She said none of that matters if at one time we don’t get to own these establishments. And there’s no need to have the right to vote if we don’t have educated voters.”

Hubbard remembers Haley for her quick temper – and the fact that she never went into a meeting unprepared.

“Oretha knew how to dream big, and she always pushed the people around her to dream even bigger,” Rouselle says. “That’s one of the legacies she leaves with us.”

Hubbard marvels at the fact that Haley “was a bridge between the so-called black militants and the liberal white women. Oretha was more militant than all of us.” When asked to explain the seeming conundrum, he says “It was a style she had.”

N. Sundiata Haley, the youngest of Haley’s sons, is excited to see the documentary honoring his mother in this, the 80th year, since her birth. Haley died in 1987 at 48.

Those 12 blocks of Oretha Castle Haley Boulevard between Howard Avenue and Philip Street have heralded a 21th Century renaissance on the former Dryades Street strip where teenaged Oretha first became aware of mercantile discrimination against blacks in New Orleans.

“People need to understand the depth of her commitment to black people. The way she lived her life was how we as a community could grow, be empowered and claim our own destiny,” Rouselle says. “In my small way, I try my best to emulate her in that regard.”