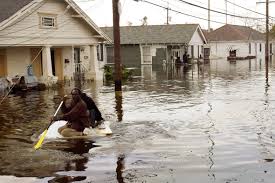 At this rate, we’ll be waking up in the morning to boil our bath water while figuring out which pirogue to take to work. The new New Orleans will be known as the new Venice, distinguishable not by its canals but by its expanded swamp. Citizens, though, will bask in the convenience of netting crawfish right off their front porches, while their kids swim in the wild with authentic Louisiana snakes and alligators.

The city’s unofficial motto of laissez les bons temps rouler will be changed to whatever the French translation is  of “Let the good times float”. It’ll be an economic boom like never before, as the city transitions into full port mode, with shipments conveniently floating straight to their destinations without the costs associated with those pesky middlemen known as trucks.

Crime will all but come to a halt as young black men establish life jacket franchises all across the city, capitalizing off the myth that black people can’t swim. Ultimately, come the city’s 600th anniversary, NOLA will displace New York as the economic capital of the United States.

This will never happen though if the SW&B manages to get its hands on an initial $75 million plus millions more over the long term to combat drainage and infrastructure problems (think faulty pumps and raggedy roads). The SW&B finds itself in this financial pickle, supposedly, due to the flooding from two years ago. The street flooding then executive director Cedric Grant initially blamed on climate change but was later chalked up to…there’s a nice way to say this…internal issues.

To pay for the emergency work associated with the flooding, the SW&B has been performing financial gymnastics, borrowing money from other internal departments, raiding reserves that affect bonds and the ability to borrow money, but like the buck, the borrowing has stopped, hence the pickle.

Money hasn’t been the only thing being shuffled over at the SW&B. So has its makeup. Prior to 2013, there were three council members on the board of directors. But after decades of politics apparently causing mismanagement, voters decided to remove council members from the board, paving the way for something more autonomous. For the past five years, though, the board has proceeded to autonomously mismanage itself, culminating in its inability to even send bills out right.

Solutions have abounded to can this pickle. Confused voters voted to send a council member, or a council member’s representative, back to the board under the thinking that one wouldn’t cause as much damage as three. Mayor Cantrell has asked that a 1% hotel tax be reinstated and/or that a portion of taxes from hotels and restaurants be redirected from tourism to infrastructure.

Meanwhile, Billy Nungesser, who for awhile never met a conversation that didn’t shift to “back during Katrina or the BP Oil Spill,” has somehow weaseled his way into becoming Lt. Governor and thereby head of tourism. His response has been a resounding: “That’s a no, dog!” And by the way, our governor, John Bel Edwards has seconded that. But the governor has accommodated the mayor by authorizing one of those infamous committees to study this and that. But as usual there’s the question of what will really happen to the money if the funding is somehow approved.

Predictably, citizens are being told that the money will go towards firming things up over at the SW&B. Hopefully, it starts with the desks and seat cushions.  As it stands now, the SW&B apparently offers its employees a lavish amount of comfort, so much so that employees are known to just spontaneously fall asleep in their seats while pathogens flow through the city’s drinking water. Sometimes citizens are notified, other times they are not.

But that’s just life in the city that care forgot, water under the bridge, or as citizens may eventually say, water under the house. As a conscious citizen, or as the youngsters say – a woke one – you have to be skeptical. The city has sung this song before, and usually it’s resulted in maintaining the status quo of a dysfunctional water system and raggedy roads. Our president says, when faced with a swamp, it’s best to drain it. Hopefully like with most other things since he’s occupied the presidency, he’s wrong.

Maybe sometimes it’s best to just let the waste float to the top. Imagine all the money you could make franchising life preservers. Yes, absurd, but given the extent and immediacy of the SW&B’s financial situation, outside the box ideas must be considered. Either way, since the funds must come through the state legislature, this should make one interesting legislative session.

7 thoughts on “More Drama with the SW&B”