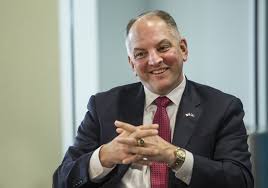 Edwards Will Make it Rain

Take it to the bank, or the credit union, or under the mattress, or wherever you stash your money these days: John Bel Edwards is going to moonwalk to re-election. Wait, that’s a Michael Jackson reference. That might not be too fashionable these days. Let’s try it again: John Bel Edwards will have an easy time retaining his seat as Louisiana’s governor. In a Southern Red state, Edwards is an amazing Democratic candidate. Some in the media aren’t ready to admit it, but Republicans know it. This can be deduced from a simple syllogism:

(*top-tiered candidate is defined as a well-known Republican with money and no prostitution scandals.)

The margin of John Bel Edwards’ victory will depend on the weather, or more succinctly, on how much rain he can produce. Presently, he’s predicting rain all across the state, a plethora of dollars falling from his budget. Money is a politician’s best friend during an election, especially when there’s plenty to spread around. After years of drought, the state’s Revenue Estimating Conference has unofficially provided Edwards with a favorable forecast.

This is how the Revenue Estimating Conference works: Six people gather in a room and decide how much money the state will have to spend. Two of the six are economists (one appointed by the Governor and the other appointed by the Legislature) who combine the previous year’s incoming taxes with present economic factors and estimate how much money the state will take in the following fiscal year. They then present that forecast to the four official members of the Conference. The four official members are 1) the Governor, 2) the Speaker of the House, 3) the President of the Senate (or somebody they designate to represent them), and 4) an independent academic who’s supposed to keep all the politicians honest.

For most of Edwards’ first term, the forecast went something like this: The state ain’t got no money, mainly due to former governor Bobby Jindal selling his soul for the presidency. It was a terrible deal. The devil is waiting on Jindal. Anyway, last June the economists suddenly realized they underestimated how much money the state was going to take in the previous fiscal year, resulting in a surplus. They’ve also predicted a surplus for the upcoming fiscal year.

Before that forecast can become official, all four members of the Conference have to be in agreement. Both the Speaker of the House and the President of the Senate are Republicans. But if their relationship to Edwards was defined by Charlie Brown’s relationship to Lucy, then the President of the Senate would be the Lucy who lets Charlie Brown kick the football, while the Speaker of the House would be the one who pulls it away and lets him fall flat on his back.

In short, the Speaker of the House hasn’t agreed to the forecast, so it’s not official, which means neither is Edwards’ proposed budget and thereby his rain.

But Edwards is the consummate politician, and there are other favorable factors in his quest for a second term. He leans just far enough left to satisfy Democratic voters. He’s pro-Obamacare, and Medicaid expansion, and for LGBTQ rights. And he also leans just enough right to satisfy Republican voters too. He’s pro-life, pro-guns, and buddy-buddy with the police.  He can also take credit for bringing the state out of the wilderness of debt and into the promised land of surplus. Sure, there was some regressive taxation along the way, but hey, we got money now. Y’all ready to eat cake? That won’t be his campaign slogan. Trust me. You can also take that to wherever you stash your money.

Eventually though, the Conference’s unofficial forecast will become official. The legislative session in Baton Rouge will start, and the rain will begin. Like leaders of other cities and parishes, New Orleans Mayor LaToya Cantrell best send out dispatches to ensure some of it falls in Orleans Parish.

2 thoughts on “How Gov. John Bel Edwards Will Be Reelected”