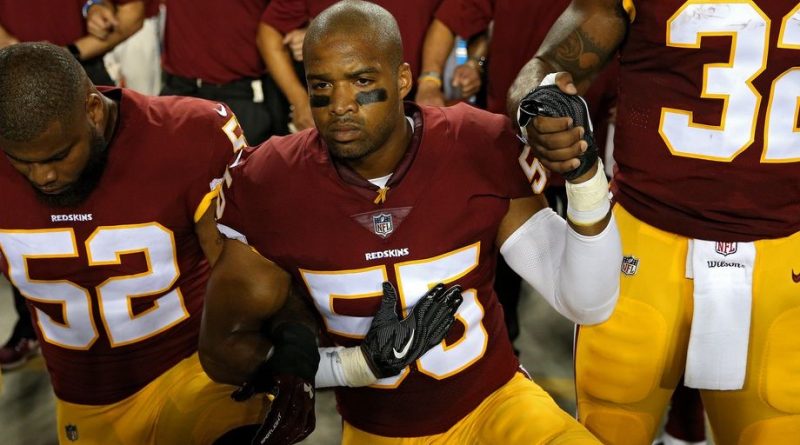 That’s what made the NFL protests so powerful.

This weekend, the football arena became a political one. During a number of Sunday’s football games, players on teams ranging from the Baltimore Ravens to the Oakland Raiders locked arms and knelt during the traditional singing of the national anthem. Their actions were a response to Donald Trump’s condemnation of protests started last year by former San Francisco 49ers quarterback Colin Kaepernick, who said he refused to “stand up to show pride in a flag for a country that oppresses black people and people of color.”

Trump told a crowd at a rally on Friday, “Wouldn’t you love to see one of these NFL owners, when somebody disrespects our flag, to say, ‘Get that son of a bitch off the field?’” and calling the national anthem protests a “total disrespect of our heritage.”

Responses to the president’s words, as well as to the protests, have been mixed. The Ravens’ owner, Steve Bisciotti, tweeted a statement of support for his players.

But some fans found the incursion of politics — implicitly, liberal politics — into football to be unwarranted, or even distasteful. One retired schoolteacher from Milwaukee told the Green Bay Press Gazette that he was “disgusted” by the kneelers, and that he’d brought American flags to wave in the stands as a counterprotest. “I’m here for football. I’m not here for politics,” another attendee told the Gazette.

But, for better or for worse, football — like many American sports — has always been, if not political, then at least politicized. The popularity of American sport culture is deeply rooted in the history of a particular kind of American “muscular Christianity,” a conflation of nationalism, nostalgia, piety, and performative masculinity. From the football stadium to the basketball court, American sports have been as much about defining a particular kind of male and typically Christian identity as they have been about the game itself.

For participants and spectators alike, sport culture is quite religion-like. As professor and theologian Randall Balmer put it in an article for Sojourners, “the sports stadium has replaced the church sanctuary as the dominant arena of piety at the turn of the 21st century, especially for American men.” And that makes the decision of athletes to protest during the “sacred” time of the game, rather than off the field, all the more powerful.

To better understand how American sports culture developed, we should turn to Victorian England, where “muscular Christianity” originated as backlash to the culture of the time. The rise of the middle class and the development of industrialization meant that your average Victorian gentleman wasn’t exactly physically active. And Victorian religion tended to focus on women and female piety. Women were generally seen as the “angels in the house” who would domesticate their men — and make them better Christians.

In other words, traditional masculinity was in decline, and men who wanted a traditionally “masculine” way of expressing their religious identity had little to go on. Meanwhile, much of the identity of members of the British Empire was defined by, well, empire — by colonial power overseas — an identity that, by the late 19th century, was in jeopardy.

“Muscular Christianity” as a movement came out of the writings of Christian men who sought to address that need. In novels and manifestos alike, they envisioned a new kind of role model for (white, British) men: the macho, heroic, strapping young adventurer who was physically and mentally fit, and who used that fitness in the service of Christianity. That Christianity, of course, also included colonizing and converting the “natives” wherever they went.

Writers like Thomas Hughes, of Tom Brown’s Schooldays, and Rudyard Kipling created the image of, to quote Hughes, “the old chivalrous and Christian belief, that a man’s body is given him to be trained and brought into subjection, and then used for the protection of the weak, the advancement of all righteous causes, and the subduing of the earth which God has given to the children of men.” Physical fitness and sports were a huge part of this ideology, from the playing fields of boarding schools like Eton or Harrow, where boys were frequently toughened up through extreme hazing, to the development of rule-driven sports like “gentleman’s boxing.”

The “muscular Christian” mentality spread to the United States in the aftermath of the Civil War, as it developed to meet similar social needs across the Atlantic. America, too, was becoming more industrialized, and the aftermath of war meant that “cowboy” and “soldier” were no longer contemporary models of masculinity. Rather, Americans sought examples of masculinity in a virtuous, Christian way.

In 19th century America, being “macho” and being a good Christian went hand in hand. Indeed, the American version of muscular Christianity was even more extreme than its English counterpart, treating effeminacy or effeteness as a spiritual and moral weakness.

As one pastor, Moses Coit Tyler, put it in his 1869 collection of essays on physical culture, The Brawnville Papers (pun intended), “since every part of our nature is the sacred gift of God, he who neglects his body, who calumniates his body, who misuses it, who allows it to grow up puny, frail, sickly, misshapen, homely, commits a sin against the Giver of the body. Ordinarily, therefore, disease is a sin. Round shoulders and narrow chests are states of criminality. The dyspepsia is heresy. The headache is infidelity. It is as truly a man’s moral duty to have a good digestion, and sweet breath, and strong arms, and stalwart legs, and an erect bearing, as it is to read his Bible, or say his prayers, or love his neighbor as himself.”

This mentality gave rise to organizations like the Young Men’s Christian Association (or YMCA). Originally founded in London to provide wholesome, physically challenging entertainment to factory workers, who might otherwise turn to alcohol, brothels, or other vices, the YMCA in America became a powerhouse of muscular-Christian values, and a defining step in the development of how sports culture functions today.

In fact, many of America’s most famous team sports were developed by educators at the YMCA precisely to keep young Christian men active between football and baseball seasons, including basketball and volleyball. For James Naismith, the YMCA physical educator credited with inventing basketball in 1891, it — like all his work — was a chance “to win men for the Master through the gym.”

Sports, in other words, weren’t just a chance to show off physical prowess or to develop interpersonal skills. Rather, they were the primary way that English and American men of the 19th and 20th centuries could define themselves and their values. These values in turn were rooted in their idea of what it meant to be “masculine” (and, often implicitly, to be white and masculine).

Given the Christian toots of Anglo-American sport culture, it’s hardly surprising that sports culture today has retained its religious flavor.

Of course, as Michael Serazio notes in the Atlantic, sport culture itself functions like a religion anyway — after all, what is the football season but a series of rituals, pegged to special times of the year, that allow fans to enter a special, even “sacred” space, to experience “epic rituals [and] spontaneous solidarity.”

But sports culture is also still deeply indebted to the ideals of Protestant muscular Christianity. We see it in athletes like Tim Tebow, who famously knelt in prayer instead of celebrating with his teammates following an overtime victory in 2011. We see it, too, in the close connections between evangelical Protestantism and sport culture at the collegiate level. A 2014 Washington Post article by Kent Babb explored the extent to which a number of Division I teams, such as Ole Miss, promoted Bible study and Christian worship among its students, while simultaneously using the promise of spiritual renewal to get an edge on recruiting top athletes.

As Babb wrote then:

…college football fits somewhere between pastime and obsession, and like church, it is more than a weekend activity. Nothing says more about a Southerner than the team he cheers on Saturdays and the church he attends on Sundays.

Football — and American sports more generally — thus represents the culmination of varied strands of American ideology about what it means to be a “man” and to express certain masculine and moral values. And, just as in the Victorian era, it offers a structured and straightforward environment to answer these questions; a temporary escape from a world in which the unquestioned role of men (and, particularly, white Christian men) is less certain.

Balmer makes this point explicitly in his Sojourners article:

…stadiums provide an alternative universe, a kind of safe haven or subculture, a place of refuge from the outside world. For the white American, middle-class male (the primary patron of sporting events), the contest itself offers a welcome contrast to the larger world because here, inside the arena, the rules are clear and impartially enforced. Everyone also knows his or her place, so…the unsavory corollary is that women are relegated to the sidelines and the only acceptable place of self-expression for men of color is within the well-regulated universe of the playing field.

There is, of course, a particular irony to the racial makeup of professional football. While the NFL viewing audience is 77 percent white, 70 percent of its players are black. (Black players are also disproportionately represented in more physically dangerous, high-collision, team positions, while white players are often in “safer” roles like that of quarterback). The “muscular Christianity” that started as a way for white British men to prepare themselves to defend their empire has given way to a system where white American men define their masculinity by watching black men risk injury and trauma.

The recent NFL protests, therefore, were all the more effective because they strike at the heart of a system that was designed not just to represent but to reinforce “American values.” Football, especially, gives spectators and participants alike a chance to engage with a nostalgic ideology of masculinity.

What better place to kneel during the national anthem than at the symbolic cultural heart of that nation?

Detractors might complain about “politics in football.” But they were already there.