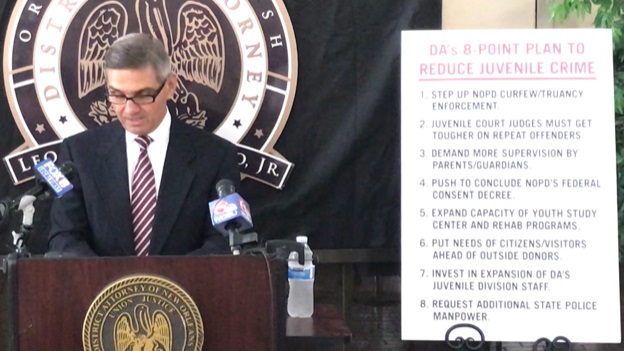 DA Leon Cannizzaro’s embarrassing rant spouting racist demagoguery is exactly what’s wrong with New Orleans.  Cannizzaro claimed to be offering solutions to the spike in juvenile crime.  In reality, he pushed a stale narrative that is not only proven ineffective, but new research shows his approach contributes to more criminal behavior.  Cannizzaro’s stance is either based in complete ignorance or stupid racism.  Either way, a new more effective approach must be implemented.  Part of the reason the state of Louisiana is worst in the nation is the dumb thinking and misguided approach suggested by Cannizzaro.

Police not the answer

New research shows simple police stops of teenaged or early twenty-year-old black males increases the likelihood that these young people will engage in future criminal behavior.  Police stops are criminogenic for young black boys and men!  Incarcerating youthful offenders does not simply increase the likelihood of future criminal activity, it creates violent hardened criminals.  That judges give harsher, longer sentences to young black men is ubiquitous.  And for centuries the proposed solution for any black male criminality has been “lock ‘em up and throw away the key.”  Our criminal justice system fails us all when dealing with young black men. For centuries, the black family has endured this trauma and only recently have independent analysts started to uncover the costs not only to black family life but to society.

Nearly nightly new videos show young black men stealing cars or stealing items from cars across the city.  In NOLA, car thefts and break ins are up by 50% so far this year.   Unfortunately, the tragic death of a citizen protecting her property was predictable.  Yet if police stopping young teenaged boys is not the answer, what should we do when crime spikes like it has in NOLA?  We all want our vehicles.  The danger of approaching these people in our vehicles could result in us getting shot.  Shooting into a car from a distance to stop a car thief would likely result in the arrest of the car owner. And who really wants to shoot am off track 16-year-old?

The best way to prevent these crimes is to make your car less likely to be stolen.

These are simple but effective short-term steps to prevent your car from being stolen.  As for those times when police interact with our youth, they should be treated like fragile commodities.  Little conversation and quick transportation to a positive interaction facility

The best way to prevent these spikes in crime is to invest in our youth. The current criminal justice system is ineffective at best. Dedicate 15% of the budgets of the NOPD, the DA, Criminal District Court, the criminal division of the Sheriff’s office and dedicate those funds to a new youth empowerment office.

3 thoughts on “Dumb DA Endangers Us All”