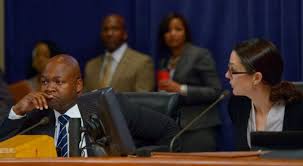 That Entergy is trying to make money should not be a surprise to anybody. Pure unadulterated profit is their primary and overriding purpose.  That the elected city council for the city of New Orleans is allowing them unfettered access to those profits at the public’s expense is a shameful disregard for the people who elected them. You wonder why people don’t vote?

Let me be clear. I ain’t mad at Entergy.  They are doing what profit seeking corporations across this country do every day.  If Popeyes can create some spooky ghost chicken to get you to think they have some new exciting chicken, then Entergy can try to put a “necessary” power plant in New Orleans East.  Spooky fried chicken with ghost pepper is just a creative way to get more of your money into their pockets.  But whilst Popeyes can fry chicken 300 different ways, Entergy only has a couple of ways to generate new profits.  Either a million new people move to the city and turn on some lights or they create new assets that can generate income for them.

Population levels in NOLA are stagnant to declining, meaning Entergy’s retail electric business is stagnant to declining in New Orleans.  So, Entergy’s new cash fortunes lie in the creation of profit assets that can guarantee a profit.  The proposed plant in New Orleans East is only one of the 6 new plants Entergy wants to build across the state.  While these are all controversial fossil fuel plants, each will provide the profit the company seeks.

None of this is evil or bad.  It’s business.  Entergy is doing everything it can to maximize profits.  They should.  But community leader, David Alverez says, “Until the day arrives when Entergy joins the citizens of New Orleans in transforming our energy grid towards a sustainable and environmentally sound design, we will continue to raise our voices and demand that our local elected leaders protect our city, our water, and our air.   Entergy’s plans for a new gas plant in New Orleans is short-sighted, profit motivated, and ignores the negative realities of fossil fuel-powered energy production – the concerns of our poor people should override profits.”

If Entergy is all about profit, who protects the residents?  The New Orleans City Council is the regulatory authority.  They can insure that New Orleans residents are 1st in line for jobs and guaranteed 50% of all contracts especially construction contracts.  Last week, the Utility committee of the council voted to approve the permit.  The full council meets today.  Will the council protect the property values, health and future of the residents of New Orleans East?  Jobs and contracts mitigate the risks associated with this gas plant.

4 thoughts on “City Council Must Do the Right Thing”