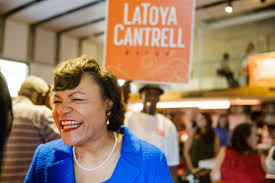 Congratulations and best wishes go to Mayor Elect Latoya Cantrell and all the newly elected members of the city council.  The city needs each to be successful and help make our city the greatest place to live and raise a family in the world. But the back story of this election is the ultimate might of the uptown political power class which defeated the people’s base of the team from east of Canal Street.  At the polls the people elected Latoya Cantrell and rejected Desiree Charbonnet.  But make no mistake, Karen Carter Peterson defeated Cedric Richmond.  Uptown beat downtown.  And for the next four years the power and economic spoils associated with the mayor’s office remain in uptown New Orleans.

New Orleans is a small market with little economic diversity, so the contracts vested in the city budget are one of the major driving forces in this economy.  Consequently the stakes are high and the fight to access those contracts is fierce.  NOLA politics is a no holds barred death match.  And the primary election negative campaign attacks on the Charbonnet campaign delivered blows from which the campaign never recovered.  While Ms. Cantrell was the beneficiary of the negative campaigning, she actually was not the first choice of the Peterson allies who launched the attack.

Politicians are the faces of the agenda.

Michael Bagneris was the preferred choice of the Leslie Jacobs led alliance that wants continued dominance of the contracts let by the city budget.  Using old school racialized politics, they excoriated Charbonnet’s closest advisors and knocked her off the perch as leading contender to second place finisher.  But instead of Bagneris, Cantrell’s campaign rose to the top while Bagneris only climbed slightly in the polls.  Combine the temper tantrum of Sidney Torres and Charbonnet’s campaign went from front running to floundering and flailing.

Going from leading the polls to falling sharply, Charbonnet’s campaign swung back with heavy blows at Cantrell.  They brought evidence of improper credit card use by Cantrell.  They questioned her financial judgement as her house faced foreclosure and she had tax liens.  While these attacks stopped the slide of the Charbonnet campaign, Cantrell’s campaign gained momentum.  Seemingly the personal financial issues legitimized Cantrell’s grass roots credentials while the credit card misuse exposed a problem with the internal controls of the city council.  If Cantrell is indicted, then nearly every other council person will be as well.  Ultimately the counterattacks were ineffective, and Cantrell’s 60-40 landslide victory was the third biggest margin in the last 30 years of mayoral elections in New Orleans.

And while Richmond and company lost the mayor’s race and the District’s C and E races, they convincingly won the council Division 1 at large seat.  Helena Moreno was an effective communicator and skilled public speaker.  Moreno was able to defeat a highly qualified and effective elected official partly because she possessed a commanding presence before crowds of people.  Similarly, Mayor Elect Cantrell easily connected with people through skilled public speaking and a magnetic personality.  Bluntly Latoya Cantrell was a much better candidate than Desiree Charbonnet.  Ms. Charbonnet did not personally connect with voters. Her style was somewhat disjointed, and she often seemed nervous and not confident.

If you are keeping score, uptown now has a decisive lead over downtown.  And if Karen Carter Peterson, whose campaign will be well financed, runs against Cedric Richmond next year there may be blood on the floor.

One thought on “Cantrell Wins in Landslide”