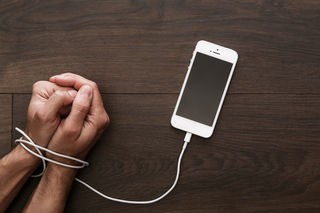 How attached are you to your phone?

f the statements above apply to you, the following may explain why. First, it is important to note that more people today experience a sense of anxiety on being separated from their phones, with approximately sixty per cent of mobile phones users experiencing nomophobia, a combination of the words no, mobile, and phobia, meaning a fear of being parted from one’s phone (King, Valença, Silva, Baczynski, Carvalho, & Nardi, 2013). So why is this the case? The answer may derive from the way in which we became attached to people in our infancy.

Many years ago, John Bowlby suggested that humans are born with the motivation to maintain a certain degree of closeness or attachment to others (Bowlby, 1969).  Attachment to our primary caregivers (parents or other people looking after us) has an obvious adaptive survival function in our childhood. However this behavior can also be triggered in adulthood situations which are similar to our earlier infant-parent interactions. Humans function better in situations where others give us a sense of closeness and attachment security. If we don’t experience attachment security, we then rely on secondary attachment strategies such as obsessively seeking contact with others (attachment anxiety) or actively keeping a distance from others (attachment avoidance). Furthermore, when our regular attachment figures are unavailable, we begin to seek out other substitute attachment targets (e.g. toys, animals or other items). Today, most people own or use a mobile phone, and it is therefore conceivable that in the absence of real people with whom to develop attachments, phones act as substitutes.

Why Attachment to a Phone?

Apart from the fact that almost everyone today uses a mobile phones there are two reasons why we may become attached to these devices. First, phones allow contact with others through social media and text messaging. Accordingly, phones have a relationship-facilitating function, which means they provide a channel through which primary attachment figures (friend, family) can be contacted.  Secondly, phones store photos, web links and other personal information and can also be customized to cater for an individuals preferences – for example, ring tone, lock screen photo etc.  The way in which a phone can be personalized for a particular individual increases its value as an object of attachment and in this regard, serves as a human attachment substitute.

They recruited 142 participants between the ages of 19 and 25 (arguably a generation which has grown up with mobile/cell phones), and asked them to complete three scales which were:

A mobile usage scale. This asked participants about specific activities for which they used their phones, such as texting, browsing the Internet, visiting social networking sites, chatting, playing games, or just calling. Participants were asked to report on a scale of one to five how often they used each of these functions.

A mobile attachment scale. This sought to measure attachment-like features of phone use, in terms of phone separation anxiety and phone proximity seeking behavior. Participants were asked to what extent the following statements were true for them. “My phone is within easy reach, even at night,” “I prefer talking about awkward things on the phone rather than face to face.”

The Adult Attachment Scale (Collins & Read, 1990).  The scale featured eighteen items and measured attachment anxiety and attachment avoidance as described above.  Example items were, “I am nervous when anyone gets too close,” “I find that people are never there when you need them.” Again, participants were asked to what extent the statements were true for them. The scale categorized people as being anxiously attached or displaying attachment avoidance. 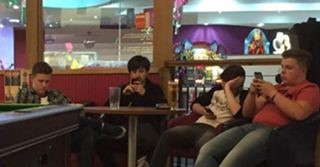 Overall the findings of this study indicated that young people displayed some kind of attachment to their mobile phone. For example in terms of proximity seeking behavior, they reported attempting to keep their phones close to them, and experiencing distress on separation from it. This type of attachment was independent from the phone’s relationship-facilitating function.

However, the study found that anxiety arising from a fear of being separated predicted a higher need for contact, meaning that for those who displayed high attachment anxiety, it was the relationship-facilitating function of their phone (being close to others) which was the most important. Keeping their phone close was equally important for all people in this study, however, only anxiously attached individuals kept their phone close in order to be in constant contact with other people.

Finally, the researchers found an association between mobile phone use and attachment anxiety. Anxiously attached individuals used their phones more but only for functions such as for social networking, and not necessarily more for calls. This may be because the amount of calls made may be declining anyway.

As pointed out above, nomophobia is reported quite extensively, but the above findings give some indication as to how this is related to attachment behavior.