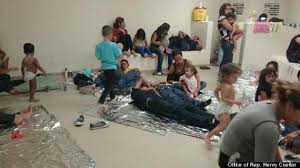 Why Trump Snatched Those Hispanic Babies.  Trump is Crazy Like A Fox on Immigration

Ok during a culture war everything is on the table.  There are no bad ideas, especially if you are doing things to disrupt or capture people of color.  But if too many white people protest, then you just stop whatever you were doing and then blame the people you were doing it to.  Your primary tools in the white community are fear and anger.  Defend the dominant culture.

President Trump is a master manipulator of the fear white Americans perceive.  The overriding white fear in America is some diminution in the absolute white control of resources. Trump’s election and presidency is based upon the notion that white Americans have lost control of some resources and his job is to return those resources to them.  This is the definition of making America great again.

The projection of the shift in American demographics is startling.  In less than 50 years whites will go from 62% of the population to 46% of the population.  And the fastest growing immigrant group will be Hispanics.  If Hispanics continue to flow into the country unabated this could exacerbate this phenomenon.  Currently we see gerrymandered political districts and voter suppression in minority districts.  Employment discrimination and wage disparities are increasing dramatically today.  Even in a market where minority employment levels are higher than recent years, wage gaps coupled with a lack of full time hours disenfranchise many minorities.  But the overriding fear is that so many Hispanics will flood the country, that some economic upheaval might occur.  But even after an influx of Hispanics, white Americas will still be the largest single group in the country.

Still, Trump goes on TV and says rapists and gang members are flooding the country.  According to Trump, these illegal people are to be feared!

WE DO HAVE AN IMMIGRATION PROBLEM 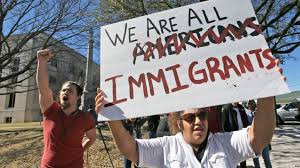 Hispanics from Central and South America are regularly denied legal entry for bureaucratic reasons.  Subsequently people cross the border without any documentation.  However, many come ill prepared to seamlessly transition into American life and sometimes need expense draining services.  The swing to conservatism in government in the past 40 years, means local governments are bare bones machines designed to slowly deliver mostly basic services. Sudden and new needs are not easily funded. And English as a second language education is burdensome on local school systems.  Citizens fear their resources will be diminished and view immigrants with a wary eye, even though they regularly hire them for day work.

When white privileged people see others’ attempts for equality, white people experience discrimination and an attack on their status.   Hispanics daring to attempt to force school systems to make costly special accommodations for their children raises the ire of many Americans. If a school is forced to end an after school special dance program to hire a few Spanish speaking teachers, then even those white parents whose children don’t take dance feel attacked.  After all, everybody’s tax dollars built the special dance studio on the school campus.  “Why can’t those people learn English if they want to go to our schools?”  Protests result, and parents and children alike look cross eyed at Jose, Maria and their parents.

President Donald Trump masterfully exploits this anger. Trump’s slanderous words provide tonic for the stressed and angered white parents. Previously welcoming parents suddenly shift.  Maybe Jose’s dad is a rapist.  Just saying he did look “kinda’ rapey” when he was pulling that poison ivy off the fence and replacing the entire side of bad fence boards.  But for sure Jose’s dad has not paid any property taxes.  So, when Trump disrupts the influx of even more immigrants and grabs their children, maybe that is a viable solution for some white parents and their children’s dance classes. Parents clap loud when Trump says we are going to stop illegal immigration.  Emboldened Trump snatches breast feeding babies off the tits of their mothers and stores them in government cages.

Culture war is a historical fact in America.  American government has been protecting the interests and values of white Americans forever.  From slavery to the separation and imprisonment of Hispanic children, government in this country attempts to block nonwhites from accessing public assets.  Viewed as a zero-sum game, whites see the access to resources by all others as taking from their limited pool of resources.

There are forces in the American consciousness that find that resist when the government over reaches.  Even some of the most conservative pundits and people expressed disapproval of the imprisonment of Hispanic children.  Trump realizes his method went too far.  And American anger turned on him.

Trump recognizes that he may have gone a little too far. But he knows this is about methodology, not protection of assets.  Support for that wall just went up!

And yall said Trump is crazy.