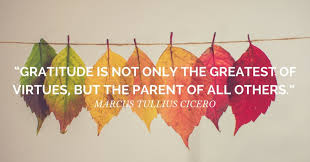 In paying homage to something that is outside us, gratitude enables us to connect with something that is not only larger than ourselves but also fundamentally good and reassuring. It opens our eyes to the miracle that is life, something to marvel at, revel in, and celebrate, rather than ignore or take for granted as it flies by. It encourages and heightens life-enhancing states such as joy, tranquility, consciousness, enthusiasm, and empathy, while inhibiting painful emotions such as anxiety, heartbreak, loneliness, regret, and envy, with which it is fundamentally incompatible.

It opens up a bigger and better perspective, shifting our focus from what we lack or strive for to what we already have, to all that we have been given, including life itself, which is the fount of all opportunity and possibility. By turning us to the outside, gratitude enables us to live not merely for ourselves but for life at large. For just this reason, Cicero described it as the greatest virtue, and, greater still, the parent of all the other virtues.

Today, science is in the process of catching up with Cicero. Studies have linked gratitude with increased satisfaction, motivation, and energy; better sleep and health; and reduced stress and sadness. Grateful people are much more engaged with their environment, leading to greater personal growth and self-acceptance, and stronger feelings of purpose, meaning, and specialness.

Gratitude connects people into a mutually supportive and sustaining mesh of social relationships, which it acts to strengthen and develop. It is the foundation of the type of society in which people can look after one another without coercion, incentives, or governmental interference, which, unlike gratitude, demean rather than exalt us.

Gratitude can be for future benefits as well as past and present benefits. Gratitude promotes optimism and optimism faith. Both Western and Eastern religious traditions emphasize gratitude. In many Christian traditions, the most important rite is the Holy Communion or Eucharist—a term which derives from ‘eucharistia’, Greek for ‘thanksgiving.’ Martin Luther himself spoke of gratitude as ‘the basic Christian attitude.’ More than a mere feeling, Christian gratitude is a virtue, or disposition of the soul, that shapes our thoughts, feelings, and actions, and that is developed, refined, and exercised through a remembered relationship with God and His creation.

In contrast, ingratitude on the part of a beneficiary is hurtful, because it negates the efforts and sacrifices of the benefactor, thereby affronting him or her, and, more than that, affronting life itself. For philosopher David Hume, ingratitude is ‘the most horrible and unnatural crime that a person is capable of committing.’ For philosopher Immanuel Kant, it is, quite simply, ‘the essence of vileness.’

Despite the great and many benefits that it confers, gratitude is hard to cultivate, because it opposes itself to deeply ingrained human traits, in particular, our striving to better our lot, our need to feel in control of our destiny, our propensity to credit ourselves for our successes while blaming others for our failures, and our belief in some sort of cosmic equality or justice. Gratitude is so opposed to our imagined needs and priorities that we need a special day for it.

Since human nature does not leave much place for it, gratitude is an attainment associated with emotional maturity—which is why children taught to parrot ‘thank you’ never really mean it. Conversely, many grown-ups express gratitude, or a semblance of gratitude, simply because doing so is useful or polite. Expressing gratitude is good manners, and the aim of good manners is to ape profundity when profundity is lacking.

In contrast, true gratitude is a rare virtue. There is a fable in Aesop about a slave who pulls a thorn out of the paw of a lion. Some time later, the slave and the lion are captured, and the slave is thrown to the lion. The hungry lion rushes bounding and roaring toward the slave, but, upon recognizing his friend, he fawns upon him and licks his hands like a friendly dog. ‘Gratitude,’ Aesop concludes, ‘is the sign of noble souls.’

Like all virtues, gratitude requires great cultivation, until such a day as we can say,

‘Thank you for nothing.’