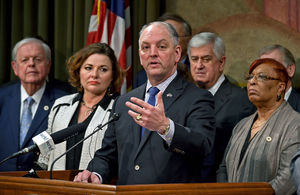 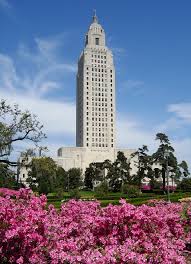 What Bobby giveth, John Bel is proposing to taketh away. Your money. Well, maybe not your money, but somebody’s money. Why? Because the state needs it, the state being the bureaucracy and governing body emanating from Baton Rouge and extending north, south, east, and west throughout what we call Louisiana. Some would say the state comprises more than that, that it comprises a social agreement between citizens and government to promote agreed upon values and provide an agreed upon way of life. But we’ll get back to that.

He says, to paraphrase, that he’s taking their money for Robin Hood-type purposes. “For too long, far too long, he says for emphasis, Louisiana, Louisiana being the non-rich, non-corporate, non-big business owning people, have footed the bill for costly tax credits and exemptions while too many very profitable businesses don’t pay a penny of income taxes,” his words, almost verbatim.

The money would help pay for things like healthcare for the poor and disabled, TOPS, and public schools, all of which the state has had problems funding ever since that former governor of ours, Bobby Jindal, traded incoming revenue for a few business friendly ratings from a hand full of magazines. In the list of things the money would pay for, though, there was no mention of the economic and contractual inflation that contribute to state departments and programs having budgets in the millions and billions, but why digress? Back to Robin Hood-type purposes.

For too long, far too long, individuals and corporations have been able to deduct what they pay in federal income taxes from what they’re supposed to pay in state taxes. The intent was to avoid excessive taxation, but since the federal government is just as budget challenged as Louisiana, this has resulted in too much lost revenue for the state, mainly from people with money paying higher federal taxes- people with money being defined as those who make over $140,000, also known as the rich in Louisiana. During the legislative session that begins today, somebody will file a bill on behalf of Governor Edwards to eliminate that deduction.

Another bill will be filed to drop the sales tax down a percent, from 10 to 9, and expand it to things rich people supposedly pay for, like massages, cable TV, and landscaping. No word has been issued about the alcohol tax th

e state increased last year, so we’re to assume that the state will continue to tax alcohol based on the alcohol content and fluid ounce. The sales tax proposal would lower the sales tax in exchange for allowing the state to increase its reach on what can be taxed while making known stress relievers like massages, alcohol, and cable TV more expensive in this stressful state. The latter part that was a joke. Kinda.

But there was something we were supposed to be getting back to, though. Oh…it was social agreements, values, and an agreed upon way of life. This is where these budgetary debates go wrong. One side will argue about fair shares, and the other will argue about boot straps, then the other side will respond by saying we’re only asking for a pittance, as in the $250-$750 the majority of business will pay under the soon to be proposed Commercial Activity Tax, but the other side will say it’s the principle of the thing (WARNING GRAPHIC LANGUAGE see Big Worm, Smokey, from the movie Friday). That just leaves us at an imapsse, arguing over freeloaders and tax evaders. Meanwhile, that shared vision becomes utopic, utopic being defined as a possibly unattainable, yet idealistic state, pun intended.

Savvy readers will notice that the ending was blown through and lacked umph, so here we are with what in classical music is known as a coda. I got nothing though, except read your newspapers, keep an eye open, or as Bob Dylan once so eloquently said, “Don’t follow leaders/watch your parking or meters,” or, in this case, traffic cameras as another writer so thoroughly dissected on this site. 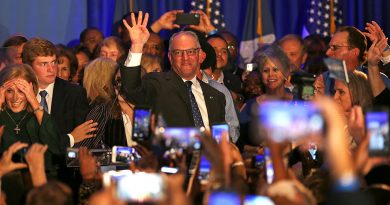