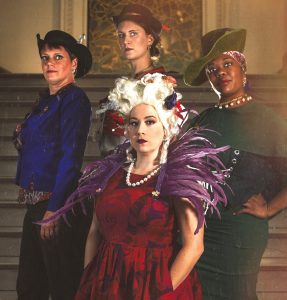 Feminism and The Revolutionists

The Revolutionists, put on by the NOLA Project in New Orleans Museum of Art’s Great Hall in September, is a play about a play. Its author, Lauren Gunderson, is the most produced playwright in America of 2017. I’m wondering why I’ve never heard of her. My friends who saw the play and then read the script, concluded the local male reviewers didn’t really get it. We are setting up groups to discuss it and use it as a vehicle to share our own experiences with each other.

Set during the French Revolution’s Reign of Terror, The Revolutionists features an unlikely sisterhood of misunderstood or overlooked provocative women, based on real people. The women, a sort of a Me Too gathering of feminists who paid a huge price for wanting to change the world, show up at the office of Olympe de Gouges to persuade her to tell their story in their words. Olympe was a real playwright.

Most of us can see ourselves – or our alter egos – in each character. Charlotte Corday, the character and the real person, is an attractive young woman who single-mindedly planned and carried out the stabbing murder of Jean-Paul Marat. “Marat is a sick, fundamentalist, political pundit who has caused the deaths of thousands of innocent people with no tool as brave as a sword, no, he uses words. So really, I’m an editor,” she explains.

Charlotte knew her actions would be talked about for centuries. She was looking to Olympe to produce something “that will sink into their memories for all time.” Olympe contends that “story is the heartbeat of humanity and humanity gets really dark when the wrong stories are leading the people.” I could relate best to Olympe. I’m an author who writes about revolutionaries. “I’m trying to help a lot of people without leaving my office,” Olympe says.  Me too.

Queen Marie Antoinette shows up to provide comic relief, excesses of ego, and an occasional profundity. Her foil is Marianne Angelle, a composite of multiple Haitian women who played pivotal roles in the Haitian Revolution, fighting on the front lines to end slavery and secure Haitian independence from France. Marie, at first, assumes Marianne is her servant. Marianne more than sets her straight. Marianne is the conscience of the play, the only woman who has a lover, and the only one who ends up alive in the end.

Director Joanna Russo says, “It is no accident that the only character for whom no historical legacy survives is a woman of color. Women need to tell our own stories – make our own art and set forth our own perspectives on events – lest those stories be misrepresented or forgotten. The imperative exists for white women and even more so for women of color. And since men historically have been less than receptive to the importance of women’s perspectives, women can only make sure that our stories are heard if we band together.”

This play is a brilliantly-acted banding together. It is often billed as a comedy. But I see it more as a tragic drama, not without hope, and with plenty of laugh lines.

Some of the questions raised: What about art? Charlotte: “Art and anything else that fakes its way through this life is useless to real human beings trying to fix the goddamn world.” Olympe: “Well. It might be fiction, but it’s not fake.” And culture. Is it just another party or is it civilization? Olympe declares that theater gets to decide who the real heroes are. She says, “All the world’s an audience.” Marianne backs her up. “A good  deed needs a good story or else it might vanish like nothing ever happened.” Fiction can be a weapon like the blade of a knife and sometimes sharper.

But Marianne reminds us, “Fiction doesn’t matter if you’re only using it to hide from reality,” and “you can’t write the world if you’re not in it.” Show up, see it, witness it, write about it, change it, remember it, the play screams.

Marie, of course, wants a re-write, and Olympe can see that “under all that vanity she’s still just a person.” Who gets the last word and when? Do the stories tell themselves or do the storytellers wrest the last word and meaning? Can these women, in their telling of their stories, with each other’s help, give the Revolution a heart? Can all the characters “buck up and witness” and give each other comfort and courage, as different as they are and as afraid? These are the dramatic tensions of the play.

Ultimately, we the audience, are what all the characters really want. We are their witness. We are interested, even at times spellbound, by their message and their stories, “more alive than fact.” And therein lies the triumph of hope.

Orissa Arend is a mediator and psychotherapist and author of Showdown in Desire: The Black Panthers 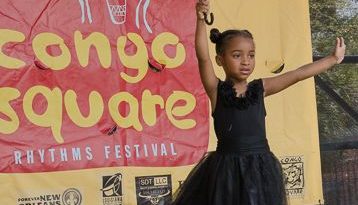